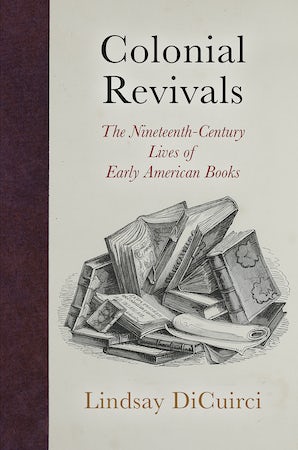 In the long nineteenth century, the specter of lost manuscripts loomed in the imagination of antiquarians, historians, and writers. Whether by war, fire, neglect, or the ravages of time itself, the colonial history of the United States was perceived as a vanishing record, its archive a hoard of materially unsound, temporally fragmented, politically fraught, and endangered documents.

Colonial Revivals traces the labors of a nineteenth-century cultural network of antiquarians, bibliophiles, amateur historians, and writers as they dug through the nation's attics and private libraries to assemble early American archives. The collection of colonial materials they thought themselves to be rescuing from oblivion were often reprinted to stave off future loss and shore up a sense of national permanence. Yet this archive proved as disorderly and incongruous as the collection of young states themselves. Instead of revealing a shared origin story, historical reprints testified to the inveterate regional, racial, doctrinal, and political fault lines in the American historical landscape.

Even as old books embodied a receding past, historical reprints reflected the antebellum period's most pressing ideological crises, from religious schisms to sectionalism to territorial expansion. Organized around four colonial regional cultures that loomed large in nineteenth-century literary history—Puritan New England, Cavalier Virginia, Quaker Pennsylvania, and the Spanish Caribbean—Colonial Revivals examines the reprinted works that enshrined these historical narratives in American archives and minds for decades to come. Revived through reprinting, the obscure texts of colonial history became new again, deployed as harbingers, models, reminders, and warnings to a nineteenth-century readership increasingly fixated on the uncertain future of the nation and its material past.

"Perhaps the greatest of the many strengths of Lindsay DiCuirci’s excellent Colonial Revivals is how it expertly integrates strategies of book history with literary analysis to generate a reinterpretation of the development of American culture in the early decades of the nineteenth century…One of the lessons of DiCuirci’s book is that making sense of the past requires more than simply recovering and reprinting texts. The fantasy of transparency both activates the work of recovery and reprinting and haunts it…DiCuirci has done a marvelous job of showing us how those debates played out in key publication projects over the course of the nineteenth century that continue to shape our perception and understanding of American history today."—Textual Cultures

"Colonial Revivals pays close attention to the materiality of historical recovery and provides a discerning analysis of the ideological and methodological contents that attended it. It makes a significant contribution to our understanding of early American literature and culture."—Thomas Augst, New York University

"A compelling and original work that will be of great interest to those who study trans-Atlantic antiquarianism, the history of the book, and the history of American historical consciousness and practice."—Seth Cotlar, Willamette University