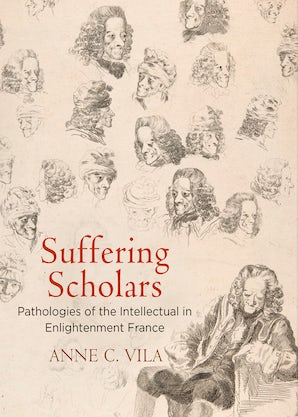 Pathologies of the Intellectual in Enlightenment France

As early as Aristotle's Problem XXX, intellectual superiority has been linked to melancholy. The association between sickness and genius continued to be a topic for discussion in the work of early modern writers, most recognizably in Robert Burton's The Anatomy of Melancholy. But it was not until the eighteenth century that the phenomenon known as the "suffering scholar" reached its apotheosis, a phenomenon illustrated by the popularity of works such as Samuel-Auguste Tissot's De la santé des gens de lettres, first published in 1768. Though hardly limited to French-speaking Europe, the link between mental endeavor and physical disorder was embraced with particular vigor there, as was the tendency to imbue intellectuals with an aura of otherness and detachment from the world. Intellectuals and artists were portrayed as peculiarly susceptible to altered states of health as well as psyche—the combination of mental intensity and somatic frailty proved both the privileges and the perils of knowledge-seeking and creative endeavor.

In Suffering Scholars, Anne C. Vila focuses on the medical and literary dimensions of the cult of celebrity that developed around great intellectuals during the French Enlightenment. Beginning with Tissot's work, which launched a subgenre of health advice aimed specifically at scholars, she demonstrates how writers like Voltaire, Diderot, Rousseau, and Mme de Staël, responded to the "suffering scholar" syndrome and helped to shape it. She traces the ways in which this syndrome influenced the cultural perceptions of iconic personae such as the philosophe, the solitary genius, and the learned lady. By showing how crucial the so-called suffering scholar was to debates about the mind-body relation as well as to sex and sensibility, Vila sheds light on the consequences book-learning was thought to have on both the individual body and the body politic, not only in the eighteenth century but also into the decades following the Revolution.

Introduction
Chapter 1. Medicine and the Cult of the Thinker, 1750-89
Chapter 2. The Ardor for Study: Inwardness and the Zealous Cerebralist
Chapter 3. Passions and the Philosophe
Chapter 4. Corporality and the Life of the Mind in Voltaire and Diderot
Chapter 5. Melancholy, Genius, and Intellectual Identity: The Cases of Rousseau and Staël
Chapter 6. Refashioning Intellectual Pathologies in the Wake of the Revolution
Epilogue. Not So Singular, After All?

"Suffering Scholars explores ideas with long lives and intricate cultural resonances. It shows the value of interdisciplinary approaches to concerns that pervaded societies in the past, and indeed continue to do so today."—Modern Philology

"Anne C. Vila's book is a model of concise and well-articulated rigor on a fascinating topic that has been neglected and overlooked-the medical literature devoted to the sicknesses of men of letters. She shows how these texts provide an excellent vantage point from which to survey significant aspects of eighteenth- and early nineteenth-century literature and medicine. A striking achievement."—Colin Jones, Queen Mary University of London