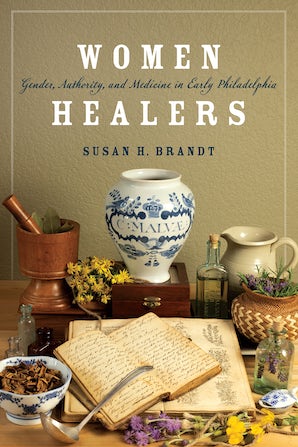 In her eighteenth-century medical recipe manuscript, the Philadelphia healer Elizabeth Coates Paschall asserted her ingenuity and authority with the bold strokes of her pen. Paschall developed an extensive healing practice, consulted medical texts, and conducted experiments based on personal observations. As British North America’s premier city of medicine and science, Philadelphia offered Paschall a nurturing environment enriched by diverse healing cultures and the Quaker values of gender equality and women’s education. She participated in transatlantic medical and scientific networks with her friend, Benjamin Franklin. Paschall was not unique, however. Women Healers recovers numerous women of European, African, and Native American descent who provided the bulk of health care in the greater Philadelphia area for centuries.

Although the history of women practitioners often begins with the 1850 founding of Philadelphia’s Female Medical College, the first women’s medical school in the United States, these students merely continued the legacies of women like Paschall. Remarkably, though, the lives and work of early American female practitioners have gone largely unexplored. While some sources depict these women as amateurs whose influence declined, Susan Brandt documents women’s authoritative medical work that continued well into the nineteenth century. Spanning a century and a half, Women Healers traces the transmission of European women’s medical remedies to the Delaware Valley where they blended with African and Indigenous women’s practices, forming hybrid healing cultures.

Drawing on extensive archival research, Brandt demonstrates that women healers were not inflexible traditional practitioners destined to fall victim to the onward march of Enlightenment science, capitalism, and medical professionalization. Instead, women of various classes and ethnicities found new sources of healing authority, engaged in the consumer medical marketplace, and resisted physicians’ attempts to marginalize them. Brandt reveals that women healers participated actively in medical and scientific knowledge production and the transition to market capitalism.

"If ever there was a moment for greater clarity and depth to our histories of health, healing, and medicine, this is it. Susan Brandt’s excellent new book, Women Healers, shows us how Black, white, and native women’s healing work intersected with ideas and practices of gender and race as well as economy, politics, and science."—Karin Wulf, John Carter Brown Library and Brown University

"Susan Brandt has uncovered a fascinating history of women healers and their contributions to modern medicine that is deeper, more persistent, and much more diverse than we have previously understood. Women healers, with their experimental flair and empirical knowledge, contributed actively to the development of modern medical and pharmaceutical science in the early U.S. Republic"—Ann Little, Colorado State University

"In this deeply researched account peopled with fascinating female practitioners, Susan Brandt traces a continuous line of women of European, African, and Native American descent who cared for the afflicted in their communities, manufactured and marketed medicines, and interacted with the leading male doctors of their day. Their healing labors spanned the colonial, revolutionary, and early national periods and connected them to the rising generation of academically trained women doctors at the end of the nineteenth century. Those interested in early American history, women’s history, and the history of medicine will want to read this book."—Kathleen M. Brown, author of Foul Bodies: Cleanliness in Early America