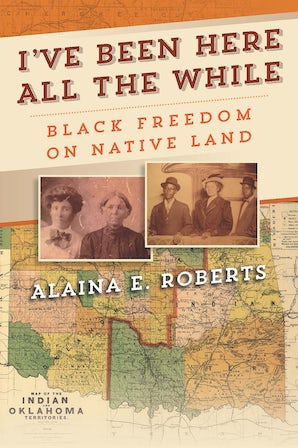 I've Been Here All the While

Perhaps no other symbol has more resonance in African American history than that of "40 acres and a mule"—the lost promise of Black reparations for slavery after the Civil War. In I've Been Here All the While, we meet the Black people who actually received this mythic 40 acres, the American settlers who coveted this land, and the Native Americans whose holdings it originated from.

In nineteenth-century Indian Territory (modern-day Oklahoma), a story unfolds that ties African American and Native American history tightly together, revealing a western theatre of Civil War and Reconstruction, in which Cherokee, Choctaw, Chickasaw, Creek, and Seminole Indians, their Black slaves, and African Americans and whites from the eastern United States fought military and rhetorical battles to lay claim to land that had been taken from others.

Through chapters that chart cycles of dispossession, land seizure, and settlement in Indian Territory, Alaina E. Roberts draws on archival research and family history to upend the traditional story of Reconstruction. She connects debates about Black freedom and Native American citizenship to westward expansion onto Native land. As Black, white, and Native people constructed ideas of race, belonging, and national identity, this part of the West became, for a short time, the last place where Black people could escape Jim Crow, finding land and exercising political rights, until Oklahoma statehood in 1907.

Alaina E. Roberts teaches history at the University of Pittsburgh.

"I’ve Been Here All the While masterfully untangles the many complicated arrangements in the U.S. government’s settlement of Indian Territory and its imposition of racial categories and restrictions. . . . Roberts’s original book will cause historians to reexamine generalities about Indigenous and Black people in Oklahoma and their empowerment and identity; and to extend the story of Reconstruction and its aftermath westward in time and space."—Library Journal

"In a lovingly personal narrative, Roberts weaves her familial history with Works Progress Administration slave narratives and testimony from the Dawes Commission to reveal that both Natives and Black people could be, at varying times, victims and perpetrators of settler colonialism."—Journal of Southern History

"Roberts brings a unique sensibility to her tale. She positions herself thoughtfully between subject and object, treating the stories collected from kith and kin with a receptive yet critical stance. These family histories are gracefully interwoven with interpretation from documentary sources. . . . I’ve Been Here All the While will endure and inspire."—Journal of the Civil War Era

"In I've Been Here All the While, historian Alaina E. Roberts tells a riveting story about Indian Territory in the Reconstruction era that illuminates a broader national moment. A descendant of the African Americans, Chickasaws, and white settlers about whom she writes, Roberts speaks in a bold voice and advances a provocative argument, urging readers to see how the various groups who migrated to Indian Territory by choice or by force all consciously participated in a process of settler colonialism and thus a national narrative. Scholars of the U.S. West, African American history and Native American history, and descendants of the many populations Roberts carefully recovers and calls to account, will want to contend with the complex portrayal she offers of family, land, hope, and loss."—Tiya Miles, author of The Dawn of Detroit: A Chronicle of Slavery and Freedom in the City of the Straits

"A revealing and heartfelt book. Alaina E. Roberts' study, clear-eyed and richly ironic, is of the tangled story of Blacks, Indians, and whites during those years when the reconstructing nation was sorting out who would be in and out of the American family. Her focus is one of the most underappreciated theaters of that story, Indian Territory. More broadly, Roberts has given us as well something of a meditation on the universal human desire for home and belonging."—Elliott West, author of The Contested Plains: Indians, Goldseekers, and the Rush to Colorado

"In her elegant book, Alaina E. Roberts powerfully illuminates themes of freedom, ownership, belonging, citizenship, opportunity, land, and colonialism in the crucible of mid-nineteenth-century Indian Territory."—Kathleen DuVal, author of Independence Lost: Lives on the Edge of the American Revolution

"Combining family history and rigorous research, this brilliant text deepens our understanding of post-Civil War Reconstruction by interrogating what happened in Indian Territory, revealing the layered wreckage wrought on the Native nations and formerly enslaved Africans, all entrapped in the pernicious logic of settler-colonialism."—Roxanne Dunbar-Ortiz, author of An Indigenous Peoples' History of the United States