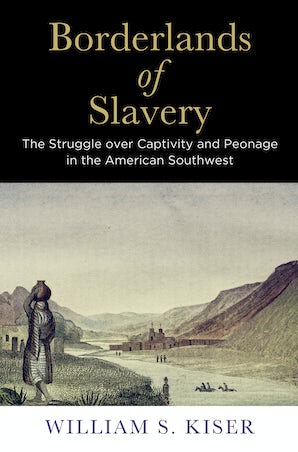 The Struggle over Captivity and Peonage in the American Southwest

It is often taken as a simple truth that the Civil War and the Thirteenth Amendment to the Constitution ended slavery in the United States. In the Southwest, however, two coercive labor systems, debt peonage—in which a debtor negotiated a relationship of servitude, often lifelong, to a creditor—and Indian captivity, not only outlived the Civil War but prompted a new struggle to define freedom and bondage in the United States.

In Borderlands of Slavery, William S. Kiser presents a comprehensive history of debt peonage and Indian captivity in the territory of New Mexico after the Civil War. It begins in the early 1700s with the development of Indian slavery through slave raiding and fictive kinship. By the early 1800s, debt peonage had emerged as a secondary form of coerced servitude in the Southwest, augmenting Indian slavery to meet increasing demand for labor. While indigenous captivity has received considerable scholarly attention, the widespread practice of debt peonage has been largely ignored. Kiser makes the case that these two intertwined systems were of not just regional but also national importance and must be understood within the context of antebellum slavery, the Civil War, emancipation, and Reconstruction.

Kiser argues that the struggle over Indian captivity and debt peonage in the Southwest helped both to broaden the public understanding of forced servitude in post-Civil War America and to expand political and judicial philosophy regarding free labor in the reunified republic. Borderlands of Slavery emphasizes the lasting legacies of captivity and peonage in Southwestern culture and society as well as in the coercive African American labor regimes in the Jim Crow South that persevered into the early twentieth century.