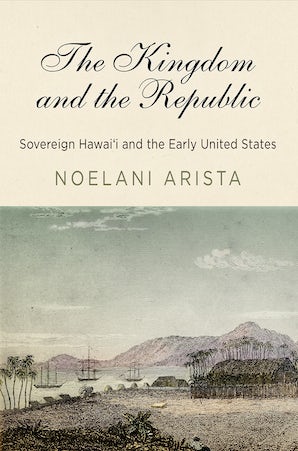 The Kingdom and the Republic

In 1823, as the first American missionaries arrived in Hawai'i, the archipelago was experiencing a profound transformation in its rule, as oral law that had been maintained for hundreds of years was in the process of becoming codified anew through the medium of writing. The arrival of sailors in pursuit of the lucrative sandalwood trade obliged the ali'i (chiefs) of the islands to pronounce legal restrictions on foreigners' access to Hawaiian women. Assuming the new missionaries were the source of these rules, sailors attacked two mission stations, fracturing relations between merchants, missionaries, and sailors, while native rulers remained firmly in charge.

In The Kingdom and the Republic, Noelani Arista (Kanaka Maoli) uncovers a trove of previously unused Hawaiian language documents to chronicle the story of Hawaiians' experience of encounter and colonialism in the nineteenth century. Through this research, she explores the political deliberations between ali'i over the sale of a Hawaiian woman to a British ship captain in 1825 and the consequences of the attacks on the mission stations. The result is a heretofore untold story of native political formation, the creation of indigenous law, and the extension of chiefly rule over natives and foreigners alike.

Relying on what is perhaps the largest archive of written indigenous language materials in North America, Arista argues that Hawaiian deliberations and actions in this period cannot be understood unless one takes into account Hawaiian understandings of the past—and the ways this knowledge of history was mobilized as a means to influence the present and secure a better future. In pursuing this history, The Kingdom and the Republic reconfigures familiar colonial histories of trade, proselytization, and negotiations over law and governance in Hawai'i.

Introduction. He Ao ʻŌlelo: A World of Words
Chapter 1. The Political Economy of Mana: Obligation, Debt, and Trade
Chapter 2. Creating an Island Imaginary: Hawaiʻi's American Origins
Chapter 3. The Isles Shall Wait for His Law: Planting the American Congregational Mission
Chapter 4. Hawaiian Women, Kapu, and the Emergence of Kānāwai
Chapter 5. Libel, Law, and Justice Before the ʻAha ʻōlelo
Afterword

"The Kingdom and the Republic fundamentally changes how we think about Hawaiian, U.S., and British history in this period-the framing of the book actually downplays that the British are just as often at the center of the action. This work has the ability to influence how we think about historical moments of encounter more broadly, and it is an important corrective to the tendency to read history backward to find the roots of domination, exaggerating the power of Euro-American actors and downplaying the authority of indigenous Governance."—American Historical Review

"Drawing on rich archives of printed materials in the Hawaiian language, Noelani Arista's The Kingdom and the Republic offers an incisive historical account of the misunderstandings and misreadings that shaped relations between native Hawaiians and European and American merchants and missionaries. Arista sets down an original and moving story about power, history and memory in the Pacific."—Ann Fabian, Rutgers University, New Brunswick

"The Kingdom and the Republic challenges some of our most basic assumptions about native Hawaiʻi, the encounters between natives and foreigners, and the processes of colonization, upending our expectations of who, in Hawaiʻi, had law and governance, and who was encountering whom."—Rebecca McLennan, University of California, Berkeley

"Compelling in its analysis and elegant in its exposition, The Kingdom and the Republic will be a force with which the coming generation of scholars of the history of Hawai'i must contend and from which they will benefit. Noelani Arista transforms the way we understand Hawaiʻi in the crucial decades between 1820 and 1840. She upends a simplistic colonial historiography that makes American missionaries the dominant forces in the period. Arista reveals instead a more complex and surprising story that speaks powerfully to questions of law, culture, language, and power in history."—David Chang, University of Minnesota