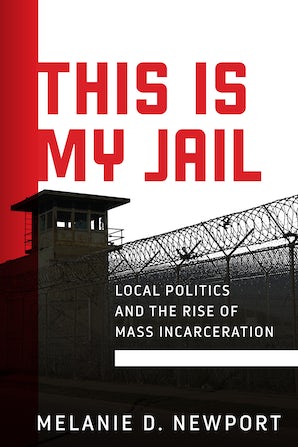 This Is My Jail

Local Politics and the Rise of Mass Incarceration

While state and federal prisons like Attica and Alcatraz occupy a central place in the national consciousness, most incarceration in the United States occurs within the walls of local jails. In This Is My Jail, Melanie D. Newport situates the late twentieth-century escalation of mass incarceration in a longer history of racialized, politically repressive jailing. Centering the political actions of people until now overlooked—jailed people, wardens, corrections officers, sheriffs, and the countless community members who battled over the functions and impact of jails—Newport shows how local, grassroots contestation shaped the rise of the carceral state.

As ground zero for struggles over criminal justice reform, particularly in the latter half of the twentieth century, jails in Chicago and Cook County were models for jailers and advocates across the nation who aimed to redefine jails as institutions of benevolent transformation. From a slave sale on the jail steps to new jail buildings to electronic monitoring, from therapy to job training, these efforts further criminalized jailed people and diminished their capacity to organize for their civil rights. With prisoners as famous as Al Capone, Dick Gregory, and Harold Washington, and a place in culture ranging from Upton Sinclair’s The Jungle to B. B. King’s Live in Cook County Jail, This Is My Jail places jails at the heart of twentieth-century urban life and politics.

As a sweeping history of urban incarceration, This Is My Jail shows that jails are critical sites of urban inequality that sustain the racist actions of the police and judges and exacerbate the harms wrought by housing discrimination, segregated schools, and inaccessible health care. Structured by liberal anti-Blackness and legacies of violence, today’s jails reflect longstanding local commitments to the unfreedom of poor people of color.

"[M]eticulously documented, tightly argued, and highly readable...This is an essential read for anyone interested in the U.S. carceral state, the failed philosophies and practices of even well-intentioned reforms, and the causes and effects of segregation, discrimination, and exclusion that link homes, schools, police, judges, and juries in the violence of racial repression that is the United States’ criminal injustice system."—Library Journal (starred review)

"Newport has written an essential document of Chicago history that provides context to many of the pressing issues that the city faces today...This Is My Jail demonstrates that it is the abolitionists who are truly fighting for an end to all violence and harm, whether it takes place in society or in jails and prisons. Histories like This Is My Jail are crucial because they connect the struggles of previous decades with those of today."—South Side Weekly

"This Is My Jail is the book we’ve been waiting for. Melanie D. Newport, with her keen historical analysis and considerable skill as a storyteller, offers a page-turning account of the central role that jails play in the rise and expansion of mass incarceration. This is one of few books that takes the jail seriously and is the definitive historical account we’ve needed all along."—Reuben Jonathan Miller, author of Halfway Home: Race, Punishment, and the Afterlife of Mass Incarceration

"Despite the growth of the field of carceral studies over the last decade, we know very little about the history and development of jails in America. Melanie D. Newport fills this glaring gap in her stunning new book. Seamlessly blending social, institutional, and urban history, Newport persuasively argues that jails function as a central, though largely unrecognized, engine of mass incarceration and racial inequality. Ultimately, This is My Jail marks a vital contribution to our understanding of the logics and practices that have systematically placed people of color behind bars in disparate numbers."—Elizabeth Hinton, author of From the War on Poverty to the War on Crime: The Making of Mass Incarceration in America

"This is the dark, untold history of the Cook County Jail that the Sheriff’s Office would rather keep silent, a long history of racism and violence that festers in the shadows of one of the United States’ most notorious criminal justice systems. Melanie D. Newport’s meticulous research exposes the false promise of a ‘benevolent’ jail and how empty reforms inflict violent punishment with racist intent."—Nicole Gonzalez Van Cleve, author of Crook County: Racism and Injustice in America's Largest Criminal Court