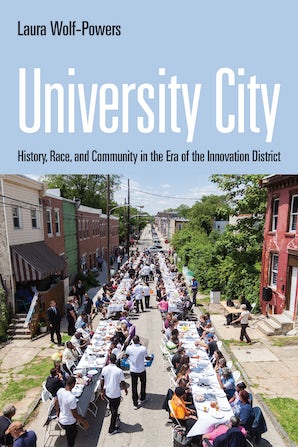 History, Race, and Community in the Era of the Innovation District

In twenty-first-century American cities, policy makers increasingly celebrate university-sponsored innovation districts as engines of inclusive growth. But the story is not so simple. In University City, Laura Wolf-Powers chronicles five decades of planning in and around the communities of West Philadelphia’s University City to illuminate how the dynamics of innovation district development in the present both depart from and connect to the politics of mid-twentieth-century urban renewal. Drawing on archival and ethnographic research, Wolf-Powers concludes that even as university and government leaders vow to develop without displacement, what existing residents value is imperiled when innovation-driven redevelopment remains accountable to the property market.

The book first traces the municipal and institutional politics that empowered officials to demolish a predominantly Black neighborhood near the University of Pennsylvania and Drexel University in the late 1960s to make way for the University City Science Center and University City High School. It also provides new insight into organizations whose members experimented during that same period with alternative conceptions of economic advancement. The book then shifts to the present, documenting contemporary efforts to position university-adjacent neighborhoods as locations for prosperity built on scientific knowledge. Wolf-Powers examines the work of mobilized civic groups to push cultural preservation concerns into the public arena and to win policies to help economically insecure families keep a foothold in changing neighborhoods.

Placing Philadelphia’s innovation districts in the context of similar development taking place around the United States, University City advocates a reorientation of redevelopment practice around the recognition that despite their negligible worth in real estate terms, the time, care, and energy people invest in their local environments—and in one another—are precious urban resources.

"A powerful interrogation of the ‘innovation district’ as the dominant urban planning model in today’s knowledge economy. Laura Wolf-Powers takes us back to the origins of innovation in West Philadelphia but brilliantly draws our attention to the nonfinancial visions of development created by local residents that have been lost to the planning focus on real estate values. By tracking the enduring harms of past development decisions, University City makes a compelling case for placing reparations at the center of urban planning."—Davarian L. Baldwin, author of In the Shadow of the Ivory Tower

"A long overdue critical look at university-driven urban development in a contemporary knowledge and innovation economy. Laura Wolf-Powers masterfully situates the rise of innovation districts as an outgrowth of the failures of mid-twentieth-century urban renewal policies and practices, specifically. She demonstrates how the emergence of coalitions of public-private interests pursue innovation-driven development, often in tension with legacy communities and predictably at the expense of more equitable and inclusive urban revitalization. This book will be an essential read for scholars who want to understand the changing dynamics of urban growth coalitions."—Sheila Foster, Georgetown University

"Laura Wolf-Powers offers a powerful, forthright accounting of what is owed to urban communities sacrificed for ‘innovation district’ redevelopment—in the twenty-first century as much as the 1950s–60s. Her telling of the story from the community’s perspective is masterful, rooted in rigorous archival research, economic analysis, and direct observation. She delivers profound insights about what residents value, and how universities’ unquestioning pursuit of ‘innovation’ created precarity among their neighbors. University City will enable clearer, more grounded, more searching understandings for all of us implicated in these contests."—Randall F. Mason, University of Pennsylvania