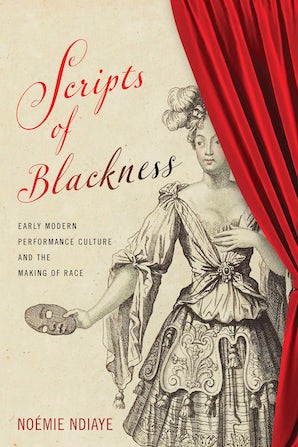 Early Modern Performance Culture and the Making of Race

Scripts of Blackness shows how the early modern mass media of theatre and performance culture at-large helped turn blackness into a racial category, that is, into a type of difference justifying emerging social hierarchies and power relations in a new world order driven by colonialism and capitalism.

In this book, Noémie Ndiaye explores the techniques of impersonation used by white performers to represent Afro-diasporic people in England, France, and Spain in the sixteenth and seventeenth centuries, using a comparative and transnational framework. She reconstructs three specific performance techniques—black-up (cosmetic blackness), blackspeak (acoustic blackness), and black dances (kinetic blackness)—in order to map out the poetics of those techniques, and track a number of metaphorical strains that early modern playtexts regularly associated with them. Those metaphorical strains, the titular scripts of blackness of this book, operated across national borders and constituted resources, as they provided spectators and participants with new ways of thinking about the Afro-diasporic people who lived or could/would ultimately live in their midst.

Those scripts were often gendered and hinged on notions of demonization, exclusion, exploitation, animalization, commodification, sexualization, consensual enslavement, misogynoir, infantilization, and evocative association with other racialized minorities. Scripts of Blackness attempts to grasp the stories that Western Europeans told themselves through performative blackness, and the effects of those fictions on early modern Afro-diasporic subjects.

"This is the first study to my knowledge that puts English, French, and Spanish early modern literatures in conversation with each other through a comparatist method that discusses the history of the African diaspora in each country’s colonial development. Noémie Ndiaye’s scholarship is the soundest I have seen on the topic of early modern race theory."—Baltasar Fra-Molinero, Bates College

"Studies of blackface performance in the early modern world have focused mostly on English plays, masques, and pageants. As Noémie Ndiaye convincingly demonstrates, those performances did not exist in isolation, and the early modern formation of blackness as a racial category was a transnational European endeavor. Scripts of Blackness is original in that it goes beyond the cosmetics and prosthetics of blackface to consider the ways black characters were made to speak and to move."—Virginia Mason Vaughan, Clark University