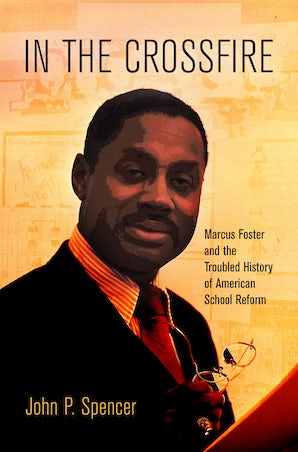 Marcus Foster and the Troubled History of American School Reform

As media reports declare crisis after crisis in public education, Americans find themselves hotly debating educational inequalities that seem to violate their nation's ideals. Why does success in school track so closely with race and socioeconomic status? How to end these apparent achievement gaps? In the Crossfire brings historical perspective to these debates by tracing the life and work of Marcus Foster, an African American educator who struggled to reform urban schools in the 1960s and early 1970s.

As a teacher, principal, and superintendent—first in his native Philadelphia and eventually in Oakland, California—Foster made success stories of urban schools and children whom others had dismissed as hopeless, only to be assassinated in 1973 by the previously unknown Symbionese Liberation Army in a bizarre protest against an allegedly racist school system. Foster's story encapsulates larger social changes in the decades after World War II: the great black migration from South to North, the civil rights movement, the decline of American cities, and the ever-increasing emphasis on education as a ticket to success. Well before the accountability agenda of the No Child Left Behind Act or the rise of charter schools, Americans came into sharp conflict over urban educational failure, with some blaming the schools and others pointing to conditions in homes and neighborhoods. By focusing on an educator who worked in the trenches and had a reputation for bridging divisions, In the Crossfire sheds new light on the continuing ideological debates over race, poverty, and achievement.

Foster charted a course between the extremes of demanding too little and expecting too much of schools as agents of opportunity in America. He called for accountability not only from educators but also from families, taxpayers, and political and economic institutions. His effort to mobilize multiple constituencies was a key to his success—and a lesson for educators and policymakers who would take aim at achievement gaps without addressing the full range of school and nonschool factors that create them.

"This is a fascinating look into one of education's more successful but less prominent figures, and will find an audience with educators, historians, and the general public."—Library Journal

"This excellent biography of a remarkable educator enriches the history of urban education. By carefully examining Foster's work in Philadelphia and Oakland, California from 1958 to 1973, John Spencer sheds new light on a pivotal era in the evolution of African American schools. . . . This well-written and persuasively argued study should be required reading in courses on the principalship, school-community relations, multiculturalism, and urban education."—Education Review

"In the Crossfire does an exemplary job of narrating Foster's educational and occupational trajectory, first as student in the Jim Crow South, then as a teacher and principal in Philadelphia, and finally as an administrator in Oakland. Yet Spencer accomplishes so much more than this. While he grounds his analysis in the singular life of one man, Spencer expertly utilizes Foster to tell a much larger story about the "troubled history" of urban education, equality, and school reform in the postwar period."—Journal of American Studies

"In the Crossfire is well researched and the author attentively places the story in the context of social and economic change and national struggles over civil rights and educational equity."—Journal of American History

"Can education improve life chances for the least fortunate among us? Or do school reformers ask too much of schools, which will never provide a solvent for American inequality? As Marcus Foster taught us, the answer is both: although schools can surely 'make a difference,' they can't overcome the yawning social and economic differences that continue to haunt us. John Spencer has produced a splendid study of a long-neglected educator, whose life ended in violence and tragedy. But Foster's message lives on, and we would all be wise to listen to it."—Jonathan Zimmerman, New York University

"In this timely and important book, John Spencer situates the tragically shortened life of the brilliant African American educator Marcus Foster in multiple contexts: the history of urban education, urban politics, and debates around strategies of school reform. Foster was one of the most dynamic and influential urban educators of the 1960s and early 1970s, and his career coincided with momentous developments in civil rights, the urban violence that rocked American cities, and economic crisis. Given the current prominence of school reform as an issue of national importance, In the Crossfire should have a wide and varied readership."—Michael Katz, University of Pennsylvania