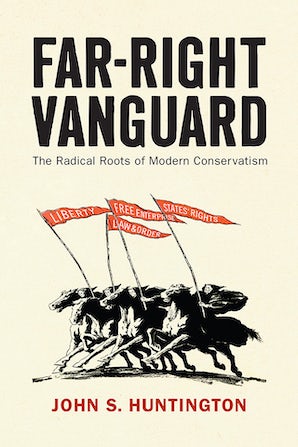 The Radical Roots of Modern Conservatism

Donald Trump shocked the nation in 2016 by winning the presidency through an ultraconservative, anti-immigrant platform, but, despite the electoral surprise, Trump's far-right views were not an aberration, nor even a recent phenomenon. In Far-Right Vanguard, John Huntington shows how, for almost a century, the far right has forced so-called "respectable" conservatives to grapple with their concerns, thereby intensifying right-wing thought and forecasting the trajectory of American politics. Ultraconservatives of the twentieth century were the vanguard of modern conservatism as it exists in the Republican Party of today.

Far-Right Vanguard chronicles the history of the ultraconservative movement, its national network, its influence on Republican Party politics, and its centrality to America's rightward turn during the second half of the twentieth century. Often marginalized as outliers, the far right grew out of the same ideological seedbed that nourished mainstream conservatism. Ultraconservatives were true reactionaries, dissenters seeking to peel back the advance of the liberal state, hoping to turn one of the major parties, if not a third party, into a bastion of true conservatism.

In the process, ultraconservatives left a deep imprint upon the cultural and philosophical bedrock of American politics. Far-right leaders built their movement through grassroots institutions, like the John Birch Society and Christian Crusade, each one a critical node in the ultraconservative network, a point of convergence for activists, politicians, and businessmen. This vibrant, interconnected web formed the movement's connective tissue and pushed far-right ideas into the political mainstream. Conspiracy theories, nativism, white supremacy, and radical libertarianism permeated far-right organizations, producing an uncompromising mindset and a hyper-partisanship that consumed conservatism and, eventually, the Republican Party.

Ultimately, the far right's politics of dissent—against racial progress, federal power, and political moderation—laid the groundwork for the aggrieved, vitriolic conservatism of the twenty-first century.

"[T]houghtful and engaging… Huntington offers valuable background and context for the ultraconservatism of today. Among other things, his account helps make sense of the latest surge in right-wing hate groups, the Jan. 6 attack on the Capitol and the continued popularity of Trump among Republicans."—The Washington Post

"The historian John Huntington’s Far-Right Vanguard offers the fullest portrait yet of the ultraconservative mobilization of the 20th century. Whereas many scholars of the right have focused on the self-conscious development of a conservative movement that took shape in the 1950s…Huntington pushes the story back to World War I and the 1920s. He suggests that we should see the rightward edge of American politics as itself a spectrum…[and] forces the reader to consider how different our own time may be—and the possibility that the resurgence of the right today not only builds on the legacies of the 20th century, but may be threatening and dangerous in new ways."—The Nation

"Huntington has made a genuine contribution to our understanding of the relationship between conservatism as a whole and its energetic right wing. This book will enrich scholars of twentieth-century American and Texas conservatism. Veteran historians and new scholars will benefit from reading it."—Southwestern Historical Quarterly

"Historians have inherited a paradigm which holds that before American conservatism could win power, it had to purge its extremes. Works like John S. Huntington's are shattering it: he establishes that ultraconservatives were the point of the spear. This is a thorough and thoughtful revision of what it meant to be 'conservative' in twentieth-century America."—Rick Perlstein, author of Reaganland: America's Right Turn, 1976-1980

"It is well past time for a serious exploration of the roots of the far right, and in this deeply researched, thoughtful, and smartly argued book, John S. Huntington delivers it. The topic is, of course, extremely timely: the far right has more political power, and is receiving more journalistic attention, than at any time in recent memory, with consequences that will reverberate for decades to come. But apart from its timeliness, the subject is an essential component of the history of conservatism, one that not only needs more attention but needs to be put more explicitly in conversation with a historiography that focuses perhaps too much on 'respectable conservatism.' For these reasons, Far-Right Vanguard is essential reading."—Nicole Hemmer, author of Messengers of the Right: Conservative Media and the Transformation of American Politics