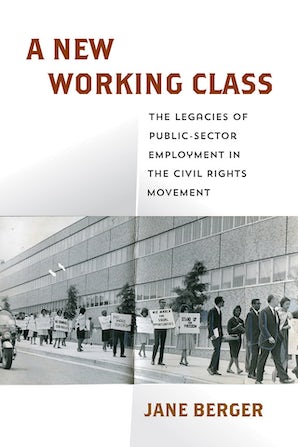 The Legacies of Public-Sector Employment in the Civil Rights Movement

For decades, civil rights activists fought against employment discrimination and for a greater role for African Americans in municipal decision-making. As their influence in city halls across the country increased, activists took advantage of the Great Society—and the government jobs it created on the local level—to advance their goals.

A New Working Class traces efforts by Black public-sector workers and their unions to fight for racial and economic justice in Baltimore. The public sector became a critical job niche for Black workers, especially women, a largely unheralded achievement of the civil rights movement. A vocal contingent of Black public-sector workers pursued the activists' goals from their government posts and sought to increase and improve public services. They also fought for their rights as workers and won union representation. During an era often associated with deindustrialization and union decline, Black government workers and their unions were just getting started.

During the 1970s and 1980s, presidents from both political parties pursued policies that imperiled these gains. Fighting funding reductions, public-sector workers and their unions defended the principle that the government has a responsibility to provide for the well-being of its residents. Federal officials justified their austerity policies, the weakening of the welfare state and strengthening of the carceral state, by criminalizing Black urban residents—including government workers and their unions. Meanwhile, workers and their unions also faced off against predominately white local officials, who responded to austerity pressures by cutting government jobs and services while simultaneously offering tax incentives to businesses and investing in low-wage, service-sector jobs. The combination of federal and local policies increased insecurity in hyper-segregated and increasingly over-policed low-income Black neighborhoods, leaving residents, particularly women, to provide themselves or do without services that public-sector workers had fought to provide.

List of Abbreviations
Introduction. Public-Sector Workers and the Battle over Cities
Chapter 1. "Boom Times" in Baltimore?
Chapter 2. "A New Mood" Is Spreading: The Great Society as Job Creation
Chapter 3. "We Had to Fight to Get This": Antipoverty Workers Take on City Hall
Chapter 4. "Better Wages and Job Conditions with Dignity": Unionizing the Public Sector
Chapter 5. "A Posture of Advocacy for the Poor": Fighting Poverty in an Era of Austerity
Chapter 6. "The Hell-Raising Period Is Over": New Federalism in Baltimore
Chapter 7. "Polishing the Apple While the Core Rots": Carter and the Cities
Chapter 8. "A Tourist Town at the Expense of the Poor": The Making of Two Baltimores
Chapter 9. "A Revolving Door for Impoverished People": Reaganomics and American Cities
Chapter 10. "There's Tragedy on Both Sides of the Layoffs": Privatization and the Urban Crisis
Conclusion
Notes
Index
Acknowledgments

"The book is a local history, thick with mentions and stories of both public actors and ordinary people known only to family and friends. It contextualizes their conditions and activism in the national economy, cultural trends, and, centrally, federal policy that influenced the availability of money to the city...Historians, policy analysts, urban scholars and practitioners, and Baltimoreans will find much of interest in this book. But they will not escape its disturbing lesson. American cultural and institutionalized assumptions about race limit Blacks’ opportunities and challenge their dignity. And those who make public policy seem to have greater stakes in maintaining these conditions than ending them."—Journal of Urban Affiairs