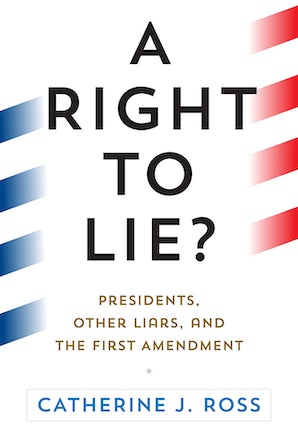 A Right to Lie?

Presidents, Other Liars, and the First Amendment

In A Right to Lie?, legal scholar Catherine J. Ross addresses the urgent issue of whether the nation's highest officers, including the president, have a right to lie under the Speech Clause, no matter what damage their falsehoods cause. Does freedom of expression protect even factual falsehoods? If so, are lies by candidates and public officials protected? And is there a constitutional path, without violating the First Amendment, to stop a president whose persistent lies endanger our lives and our democracy?

Perhaps counter-intuitively, the general answer to each question is "yes." Drawing from dramatic court cases about defamers, proponents of birtherism, braggarts, and office holders, Ross reveals the almost insurmountable constitutional and practical obstacles to legal efforts to rein in public deception. She explains the rules that govern the treatment of lies, while also demonstrating the incalculable damage presidential mendacity may lead to, as revealed in President Trump's lies about the COVID-19 pandemic and the legitimacy of the 2020 election.

Falsehoods have been at issue in every presidential impeachment proceeding from Nixon to Trump. But, until now, no one has analyzed why public lies might be impeachable offenses, and whether the First Amendment would provide a defense. Noting that speech by public employees does not receive the same First Amendment protection as the speech of ordinary citizens, Ross proposes the constitutionally viable solution of treating presidents as public employees who work for the people. Charged with oversight of the Executive, Congress may—and should—put future presidents on notice that material lies to the public on substantial matters will be deemed a "high crime and misdemeanor" subject to censure and even impeachment. A Right to Lie? explains how this approach could work if the political will were in place.

"Catherine J. Ross, one of the country's leading experts on freedom of speech, has written an elegant and provocative book on a topic of great importance: How should lies be treated under the First Amendment? As Ross shows, falsehoods can do enormous harm. But our constitutional jurisprudence has failed to provide a meaningful approach, especially when the lies come from a president or are viral over social media. In this clearly written, engaging book, Ross provides a path forward."—Erwin Chemerinsky, University of California, Berkeley School of Law