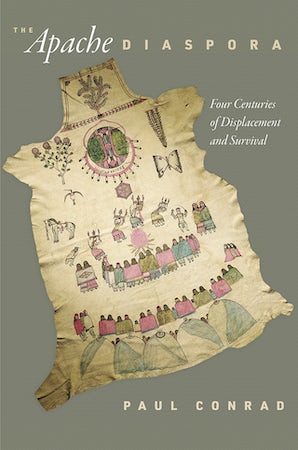 Four Centuries of Displacement and Survival

Across four centuries, Apache (Ndé) peoples in the North American West confronted enslavement and forced migration schemes intended to exploit, subjugate, or eliminate them. While many Indigenous groups in the Americas lived through similar histories, Apaches were especially affected owing to their mobility, resistance, and proximity to multiple imperial powers. Spanish, Comanche, Mexican, and American efforts scattered thousands of Apaches across the continent and into the Caribbean and deeply impacted Apache groups that managed to remain in the Southwest.

Based on archival research in Spain, Mexico, and the United States, as well Apache oral histories, The Apache Diaspora brings to life the stories of displaced Apaches and the kin from whom they were separated. Paul Conrad charts Apaches' efforts to survive or return home from places as far-flung as Cuba and Pennsylvania, Mexico City and Montreal. As Conrad argues, diaspora was deeply influential not only to those displaced, but also to Apache groups who managed to remain in the West, influencing the strategies of mobility and resistance for which they would become famous around the world.

Through its broad chronological and geographical scope, The Apache Diaspora sheds new light on a range of topics, including genocide and Indigenous survival, the intersection of Native and African diasporas, and the rise of deportation and incarceration as key strategies of state control. As Conrad demonstrates, centuries of enslavement, warfare, and forced migrations failed to bring a final solution to the supposed problem of Apache independence and mobility. Spain, Mexico, and the United States all overestimated their own power and underestimated Apache resistance and creativity. Yet in the process, both Native and colonial societies were changed.

"In an important [and] moving contribution to both Native and diaspora studies . . . Conrad, a non-native, begins by respectfully acknowledging his outsider status and then weaves stories of the Apache across history by using extensive archival resources in multiple states as well as Mexico and Spain to put names (and, when he can, faces) to many figures who have been lost within White-dominated textbooks. By focusing on the personal sides of these stories, the author connects readers directly to a history that should be better known."—Kirkus Reviews

[A] study of displacement and survival that is daunting in its scope and impressive for its research. Conrad surveys 400 years of Apache history...Conrad has produced a vivid contribution to the ongoing discussion about whether and how diaspora is a fitting label for the myriad experiences of people subjugated under colonialism. It will not only be essential reading for scholars of Indigenous peoples of the Southwest, but also for those interested in uniting disparate temporal and geographic subfields.

"Impressively researched...the diasporic framework offers fresh insights into changing Apache kin networks and identities. The close-ups of people, places, and events that Conrad shares with readers in the latter half of the book enrich both his analysis and our understanding of the Apache diaspora. Indeed, The Apache Diaspora is part of a small but growing body of scholarship that uses diaspora to breathe new life into ethnohistory. Conrad’s analysis is welcome and timely; his work is deserving of a wide readership."—The Journal of Arizona History

"This is the first comprehensive examination of Apache (Ndé) groups from the 1500s, when they entered the Spanish documentary record, to the twentieth century...Conrad’s deeply sympathetic and well-written book presents a tragic history with much suffering and unfairness but also with an unshakeable will to remain."—Journal of the Early Republic

"Paul Conrad’s wonderful book, The Apache Diaspora, undertakes [an] ambitious and important task by training its focus on the Ndé, or Apache peoples of the American Southwest....[T]his is an essential contribution to the historiography and an outstanding piece of historical scholarship. The Apache Diaspora will stimulate important conversations in graduate seminars and will make an invaluable read for anyone interested in the broad and chaotic scope of conquest."—H-Early America

"[An] ambitious and powerful work...[T]his is a sweeping work covering four hundred years of history in order to highlight pre- as well as post-conquest experiences of Apache life in regard to captivity, mobility, and colonization...What emerges in this narrative are the different approaches Apache people used to resist and survive despite the persistent efforts of outsiders to exploit, subjugate, or eliminate them over more than four hundred years. Indeed, this work highlights some of the continuities within Native resistance amid colonization and diaspora, and all the while brings readers into close contact with Apache stories."—Early American Literature

"[A] deeply researched, well-written study of the Apache diaspora...Conrad successfully argues that the legacy of this long Apache diaspora is deep and lasting. Many remain separated from their homeland to this day. Factions endure. And Native peoples, Apaches included, still face disproportionate rates of incarceration and violence...The Apache Diaspora is a major contribution to Native American and Apache history and to the field of diaspora studies."—The Journal of American History

"In this sweeping, detailed study, Paul Conrad interprets four centuries of Apache history through the analytical framework of diaspora...Deeply researched and extensive in scope, this book should appeal to a wide readership in Borderlands, American Indian, and colonial North American and Latin American history."—Journal of Early American History

"The first comprehensive history of the Apache nations, this is a revelatory book of enormous importance. Ranging from North America to the Caribbean, Paul Conrad illuminates four centuries of violence, enslavement, resistance, diaspora, and survival. Reading The Apache Diaspora is to see American history itself anew."—Pekka Hämäläinen, author of Lakota America: A New History of Indigenous Power

"The study of America's borderlands history is as incomplete as it is inadequate without consideration of Apache peoples and their centuries-long struggles for survival and autonomy. With breathtaking range and focus, The Apache Diaspora provides a powerful overview of nearly four centuries of Apache history and offers a series of sobering analyses into the varied phases of enslavement, warfare, and forced migrations that structured much of colonial and nineteenth-century history. A vital addition to the field."—Ned Blackhawk, author of Violence over the Land: Indians and Empires in the Early American West

"Through deep research and amazing stories that pull the reader into the lives, hopes, and despairs of Apache individuals and families, Paul Conrad offers unique chronological breadth and perspective from which to view the centuries-long experience, burden, and legacy of enslavement and removal suffered by Native people within American history. The unremitting displacements endured by Apaches over four centuries go directly to the heart of their determination to evade imprisonment and to protect kinship integrity through mobility, as they transformed movement into a tool to achieve diplomatic, military, and sovereign advantage in their contests with foreign governments and would-be conquerors."—Juliana Barr, author of Peace Came in the Form of a Woman: Indians and Spaniards in the Texas Borderlands