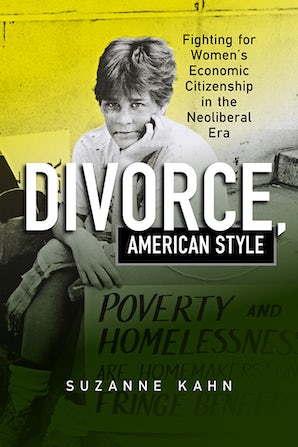 Fighting for Women's Economic Citizenship in the Neoliberal Era

In the 1970s, the divorce rate in the United States doubled, and longtime homemakers suddenly found themselves at risk of poverty, not only because their husband's job was their sole source of income, but also because their insurance, retirement, and credit worthiness were all tied to their spouse's employment. Divorce, American Style examines how newly divorced women and policymakers responded to the crisis that rising divorce rates created for American society.

Suzanne Kahn shows that, ironically, rising divorce rates led to policies that actually strengthened the social insurance system's use of marriage to determine eligibility for benefits. Large numbers of newly divorced women quickly realized their invisibility within the American welfare state, which did not distribute benefits to most women directly but rather through their husbands. These newly divorced women organized themselves into a political force, and they were remarkably successful in securing legislation designed to address divorced women's needs. But this required significant compromise with policymakers, and these new laws specifically rewarded intact marriages, providing more robust benefits to women in longer marriages. These incentives remain in place today. Indeed, in the thirty years since this legislative compromise, activists' efforts to grapple with the legal system created out of this crisis have affected such high-profile debates as the fight over the Affordable Care Act and the battle for marriage equality.

Divorce, American Style contests the frequent claim that marriage has become a more flexible legal status over time. Enduring ideas about marriage and the family continue to have a powerful effect on the structure of a wide range of social programs in the United States.

Part II. A Galaxy of Laws
Chapter 3. Partners or Parasites? Class, Race, and Credit Rights
Chapter 4. The Privileges of Marriage: Divorced Women and Selective Entitlements to HealthCare
Chapter 5. Marriage as Work, Marriage as Partnership: Divorced Women's Fight for Social Security
Chapter 6. "How You Lose Money by Being a Woman": Divorce in an Age of Proliferating Retirement Savings Options
Chapter 7. An Expensive Endurance Test: Compromising Toward Success in the 1980s

"[A] fascinating, thorough, and highly readable study of divorce in the history of 20th Century U.S. feminism...Divorce, American Style provides a rigorously-documented narrative of a uniquely American feminism at a pivotal point in history. It provides important new leverage for understanding how both feminism and social welfare policy got where they are today by focusing on the key intersections between them, as drawn through the legislative and policy debates Kahn explores in correspondence, drafts, committee reports, feminist meeting minutes, news reports, statistical data, and politicians’ pronouncements."—Society for U.S. intellectual History