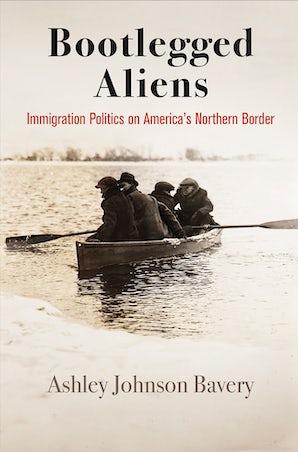 In contemporary discourse, much of the discussion of U.S. border politics focuses on the Southwest. In Bootlegged Aliens, however, Ashley Johnson Bavery considers the North as a borderlands region, demonstrating how this often-overlooked border influenced government policies toward illegal immigration, business and labor union practices around migrant labor, and the experience of being an illegal immigrant in early twentieth-century industrial America. Bavery examines how immigrants, politicians, and employers helped shape national policies toward noncitizen laborers. In the process, she uncovers the northern industrial origins of an exploitative system that emerged on America's border with Canada, whose legacy remains central to debates about America's borders today.

Bavery begins in the 1920s to explore how that decade's immigration restrictions launched an era of policing and profiling that excluded America's foreign born from the benefits of citizenship. On the border between Detroit and Windsor, Canada, this process turned certain Europeans into undocumented immigrants, a group the press and policymakers referred to as bootlegged aliens. Over the next decade, deportation and policing practices stigmatized entire communities of ethnic Europeans regardless of their legal status. Moreover, restrictive laws allowed manufacturers to exploit workers in new ways. By the Great Depression, citizenship had become an invisible boundary that excluded hundreds of thousands of laborers from New Deal entitlements. Accepted wisdom suggests that the 1924 Immigration Act had allowed ethnic Europeans to shed ties to their homelands and assimilate into the "melting pot" of American culture by the 1930s. Bavery challenges this perspective, finding that, instead of forging a common culture with their fellow workers, European immigrants coming through Canada to Detroit faced statewide registration drives, exclusion from key labor unions, and disqualification from the Works Progress Administration, the cornerstone of America's nascent welfare state. In the heart of industrial America, Bootlegged Aliens reveals, citizenship was highly contingent.

"Bootlegged Aliens helps us rethink how boundaries of citizenship shifted as the welfare state expanded. Ashley Johnson Bavery challenges the common conception that the nativism of the 1920s was largely an outgrowth of right-wing reactionary politics and demonstrates how left-wing politics of the 1920s and 1930s likewise helped build the foundation for nativist sentiments."—Holly M. Karibo, author of Sin City North: Sex, Drugs, and Citizenship in the Detroit-Windsor Borderland

"Bootlegged Aliens is an engagingly written history of U.S. immigration policy centered on the experiences of southern and eastern European immigrants in Detroit in the 1920s and 1930s, with special attention to Detroit's position on the U.S.-Canadian border. It appeals to not only scholars but also anyone interested in American urban and immigration history."—Tracy Neumann, author of Remaking the Rust Belt: The Postindustrial Transformation of North America