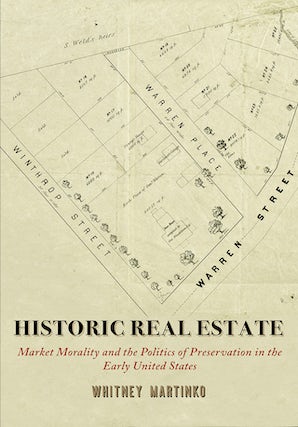 In Historic Real Estate, Whitney Martinko shows how Americans in the fledgling United States pointed to evidence of the past in the world around them and debated whether, and how, to preserve historic structures as permanent features of the new nation's landscape. From Indigenous mounds in the Ohio Valley to Independence Hall in Philadelphia; from Benjamin Franklin's childhood home in Boston to St. Philip's Episcopal Church in Charleston, South Carolina; from Dutch colonial manors of the Hudson Valley to Henry Clay's Kentucky estate, early advocates of preservation strove not only to place boundaries on competitive real estate markets but also to determine what should not be for sale, how consumers should behave, and how certain types of labor should be valued.

Before historic preservation existed as we know it today, many Americans articulated eclectic and sometimes contradictory definitions of architectural preservation to work out practical strategies for defining the relationship between public good and private profit. In arguing for the preservation of houses of worship and Indigenous earthworks, for example, some invoked the "public interest" of their stewards to strengthen corporate control of these collective spaces. Meanwhile, businessmen and political partisans adopted preservation of commercial sites to create opportunities for, and limits on, individual profit in a growing marketplace of goods. And owners of old houses and ancestral estates developed methods of preservation to reconcile competing demands for the seclusion of, and access to, American homes to shape the ways that capitalism affected family economies. In these ways, individuals harnessed preservation to garner political, economic, and social profit from the performance of public service.

Ultimately, Martinko argues, by portraying the problems of the real estate market as social rather than economic, advocates of preservation affirmed a capitalist system of land development by promising to make it moral.

"The integration of the histories of preservation and capitalism in this book is innovative and analytically nuanced. The volume is handsomely produced, with a readable format, useful illustrations, and an attractive plate section. The overall physical quality of the volume reinforces its substantial contribution to the role of preservation in shaping early national America. Historic Real Estate is a fine book, and it should stand as a valuable new addition to the edifice of scholarship on architecture, economy, and society in the nineteenth-century United States."—Journal of Early American History

Using an impressive variety of visual, textual, and linguistic sources, [Martinko] reframes common understandings of early American preservation around concepts of virtue and economic morality in the public and private sectors, contending that preservation is a central part of the history of urbanism and capitalism in the United States. In doing so, Martinko joins a small but growing number of preservation scholars whose research challenges long-held beliefs about preservation’s early predilection for aestheticism and nation-building...Martinko’s calls for connection—for communication and recognition of each other across space and time—provide a much needed push to incorporate a more humanistic, unifying, and integrative approach to society’s treatment of the historic built environment.

"With skill and great insight, Whitney Martinko reveals the centrality of the architectural past to the nation's capitalist future. By steering the forces of creative destruction away from select structures, nineteenth-century Americans ultimately made it easier to shroud real estate development in the mantle of a public-spirited idealism that persists to the present day. The strength of Martinko's analysis is matched only by the production value of this lavishly illustrated volume."—Seth Rockman, Brown University