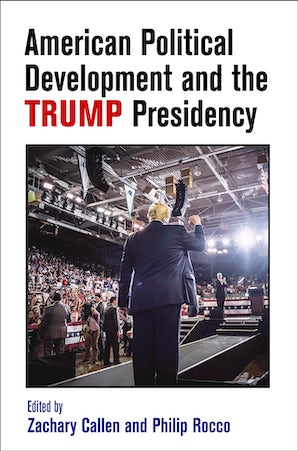 In virtually all respects, the Trump presidency has disrupted patterns of presidential governance. However, does Trump signify a disruption, not merely in political style but in regime type in the United States? Assessing Trump's potential impact on democratic institutions requires an analysis of how these institutions—including especially the executive branch—have developed over time as well as an examination of the intersecting evolution of political parties, racial ideologies, and governing mechanisms. To explore how time and temporality have shaped the Trump presidency, editors Zachary Callen and Philip Rocco have brought together scholars in the research tradition of American political development (APD), which explicitly aims to consider how interactions between a range of institutions result in the shifting of power and authority in American politics, with careful attention paid to complex processes unfolding over time. By focusing on the factors that contribute to both continuity and change in American politics, APD is ideally situated to take a long view and help make sense of the Trump presidency.

American Political Development and the Trump Presidency features contributions by leading political scientists grappling with the reasons why Donald Trump was elected and the meaning of his presidency for the future of American politics. Taking a historical and comparative approach—instead of viewing Trump's election as a singular moment in American politics—the essays here consider how Trump's election coincides with larger changes in democratic ideals, institutional structures, long-standing biases, and demographic trends. The Trump presidency, as this volume demonstrates, emerged from a gradual unsettling of ideational and institutional lineages. In turn, these essays consider how Trump's disruptive style of governance may further unsettle the formal and informal rules of American political life.

"Zachary Callen and Philip Rocco have assembled an impressive collection of articles that represent the important insights into the Trump presidency that APD scholars can provide. The topics and approaches of the contributors to this volume are diverse, but the book's chapters collectively shed fresh light on four classic themes in the APD literature: presidential leadership, the administrative state, policy feedback effects, and the politics of race. Many of the authors draw on seminal works in APD, but they employ these works to show how the Trump presidency complicates or challenges what we thought we knew . . . [F]or anyone interested in placing the Trump presidency in a larger historical context American Political Development and the Trump Presidency is recommended reading."—Congress & The Presidency

"An original and insightful collection, American Political Development and the Trump Presidency develops a deeper understanding of Trump, his campaign, and his governing, and makes the case for American political development as the best approach through which to analyze these unusual times."—Julie Novkov, University at Albany-SUNY