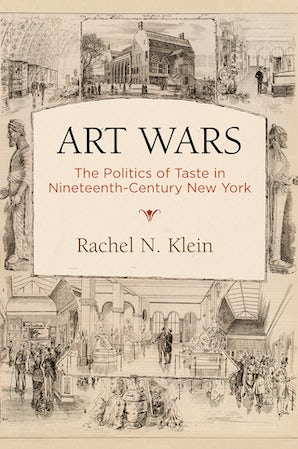 The Politics of Taste in Nineteenth-Century New York

From the antebellum era through the Gilded Age, New York City's leading art institutions were lightning rods for conflict. In the decades before the Civil War, art promoters believed that aesthetic taste could foster national unity and assuage urban conflicts; by the 1880s such hopes had faded, and the taste for art assumed more personal connotations associated with consumption and domestic decoration. Art Wars chronicles three protracted public battles that marked this transformation. The first battle began in 1849 and resulted in the downfall of the American Art-Union, the most popular and influential art institution in North America at mid-century. The second erupted in 1880 over the Metropolitan Museum's massive collection of Cypriot antiquities, which had been plundered and sold to its trustees by the man who became the museum's first paid director. The third escalated in the mid-1880s and forced the Metropolitan Museum to open its doors on Sunday—the only day when working people were able to attend.

In chronicling these disputes, Rachel N. Klein considers cultural fissures that ran much deeper than the specific complaints that landed protagonists in court. New York's major nineteenth-century art institutions came under intense scrutiny not only because Americans invested them with moral and civic consequences but also because they were part and parcel of explosive processes associated with the rise of industrial capitalism. Elite New Yorkers spearheaded the creation of the Art-Union and the Metropolitan, but those institutions became enmeshed in popular struggles related to slavery, immigration, race, industrial production, and the rights of working people. Art Wars examines popular engagement with New York's art institutions and illuminates the changing cultural role of art exhibition over the course of the nineteenth century.

Introduction. The Importance of Taste: Intellectual Roots 1
Chapter 1. Paintings in Public Life: The Rise of the American Art-Union
Chapter 2. The Limits of Cultural Stewardship: The Fall of the American Art-Union
Chapter 3. Art and Industry: Debates of the 1850s
Chapter 4. The Art of Decoration and the Transformation of Stewardship: The Making of the Metropolitan Museum of Art
Chapter 5. Metropolitan Museum on Trial: Antiquities, Expertise and the Problem of Race
Chapter 6. The Battle for Sundays at the Museum
Epilogue. Edith Wharton's Museum

"Rachel Klein's compelling, beautifully written, and insightful study adds importantly to our understanding of the complex historical relationship between art, nation-building, and the rise of individual-oriented consumer culture in nineteenth-century America. A smart, nuanced work that is also highly engaging and readable, Art Wars shows us that ideas of art and democracy have long been intertwined."—Alice Fahs, University of California, Irvine

"Art Wars provides a welcome addition to cultural and intellectual histories of New York in the nineteenth century by bringing together the history of antebellum art institutions like the American Art-Union and museums like the Metropolitan that came into being in the 1870s. Rachel Klein links these institutional stories to larger political and cultural transformations that accompanied the rise of industrial capitalism that so dramatically changed a city like New York. Art Wars will be a very important addition to the history of art institutions and the historiography of taste in the United States as well as to the intellectual and cultural histories of cities in the nineteenth century."—Jeffrey Trask, Things American: Art Museums and Civic Culture in the Progressive Era