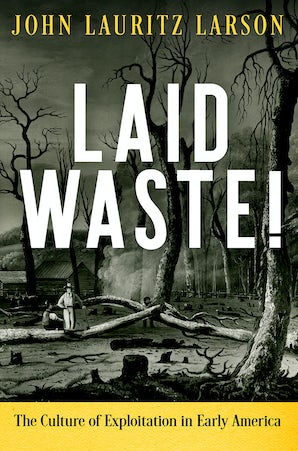 The Culture of Exploitation in Early America

After humble beginnings as faltering British colonies, the United States acquired astonishing wealth and power as the result of what we now refer to as modernization. Originating in England and Western Europe, transplanted to the Americas, then copied around the world in the nineteenth and twentieth centuries, this process locked together science and technology, political democracy, economic freedom, and competitive capitalism. This has produced for some populations unimagined wealth and material comfort, yet it has also now brought the global environment to a tipping point beyond which life as we know it may not be sustainable. How did we come to endanger the very future of life on earth in our heedless pursuit of wealth and happiness?

In Laid Waste!, John Lauritz Larson answers that question with a 350-year review of the roots of an American "culture of exploitation" that has left us free, rich, and without an honest sense of how this crisis came to be. Larson undertakes an ambitious historical synthesis, seeking to illuminate how the culture of exploitation grew out of the earliest English settlements and has continually undergirded U.S. society and its cherished myths. Through a series of meditations on key concepts, the story moves from the starving times of early Jamestown through the rise of colonial prosperity, the liberation of the revolutionary generation, the launching of the American republic, and the emergence of a new global industrial power by the end of the nineteenth century. Through this story, the book explores the rise of an American sense of righteousness, entitlement, and destiny that has masked any recognition that our wealth and success has come at expense to anyone or anything. Part polemic, part jeremiad, and part historical overview, Laid Waste! is a provocative and bracing account of how the development of American culture itself has led us to today's crises.

"John Lauritz Larson's Laid Waste! is extraordinary for its erudition, literary power, moral passion, and, most of all, its sweeping historical analysis of America's 'culture of exploitation' and its disposition to treat the natural world as nothing more than a source of wealth to be stripped for private gain. It is an outstanding example of the unique value of good history in diagnosing the root causes of a contemporary problem and sketching the outlines of what must change to address it."—Harry Watson, University of North Carolina, Chapel Hill

"Laid Waste! is a brilliant capstone to a remarkable series of publications by John Lauritz Larson that share a common thread: a close analysis of the conditions and ramifications of economic development in American history in the nineteenth century. Here Larson exposes a 'culture of exploitation' beneath modernization that has ravaged the environment in the name of liberty and progress and now threatens the very existence of life on earth. This is an important book, and we ignore its passionate call for change at our peril."—James Farr, Purdue University