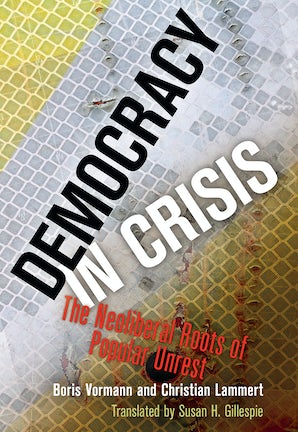 The Neoliberal Roots of Popular Unrest

Liberal democracies on both sides of the Atlantic find themselves approaching a state of emergency, beset by potent populist challenges of the right and left. But what exactly lies at the core of widespread dissatisfaction with the status quo? And how can the challenge be overcome?

In Democracy in Crisis, Christian Lammert and Boris Vormann argue that the rise of populism in North Atlantic states is not the cause of a crisis of governance but its result. This crisis has been many decades in the making and is intricately linked to the rise of a certain type of political philosophy and practice in which economic rationality has hollowed out political values and led to an impoverishment of the political sphere more broadly. The process began in the 1980s, when the United States and Great Britain decided to unleash markets in the name of economic growth and democracy. After the fall of the Berlin Wall, several countries in Europe followed suit and marketized their educational, social, and healthcare systems, which in turn increased inequality and fragmentation. The result has been a collapse of social cohesion and trust that the populists promise to address but only make worse. Looking to the future, Lammert and Vormann conclude their analysis with concrete suggestions for ways politics can once again be placed in the foreground, with markets serving social relations rather than the reverse.

Chapter 1. No Alternatives?
Chapter 2. Failed Promises and the Logic of Necessity
Chapter 3. Democracy in America
Chapter 4. Europe Disunited
Chapter 5. The Beginning of History