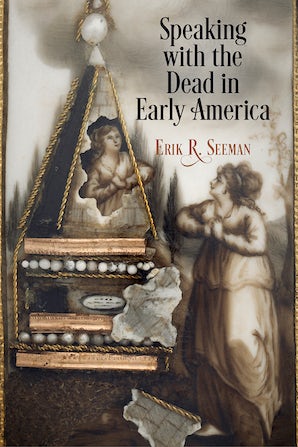 Speaking with the Dead in Early America

In late medieval Catholicism, mourners employed an array of practices to maintain connection with the deceased—most crucially, the belief in purgatory, a middle place between heaven and hell where souls could be helped by the actions of the living. In the early sixteenth century, the Reformation abolished purgatory, as its leaders did not want attention to the dead diminishing people's devotion to God. But while the Reformation was supposed to end communication between the living and dead, it turns out the result was in fact more complicated than historians have realized. In the three centuries after the Reformation, Protestants imagined continuing relationships with the dead, and the desire for these relations came to form an important—and since neglected—aspect of Protestant belief and practice.

In Speaking with the Dead in Early America, historian Erik R. Seeman undertakes a 300-year history of Protestant communication with the dead. Seeman chronicles the story of Protestants' relationships with the deceased from Elizabethan England to puritan New England and then on through the American Enlightenment into the middle of the nineteenth century with the explosion of interest in Spiritualism. He brings together a wide range of sources to uncover the beliefs and practices of both ordinary people, especially women, and religious leaders. This prodigious research reveals how sermons, elegies, and epitaphs portrayed the dead as speaking or being spoken to, how ghost stories and Gothic fiction depicted a permeable boundary between this world and the next, and how parlor songs and funeral hymns encouraged singers to imagine communication with the dead. Speaking with the Dead in Early America thus boldly reinterprets Protestantism as a religion in which the dead played a central role.

"[A] searching, consistently engaging, and revealing examination of a topic central to American cultural and religious history. And what it ends up revealing includes not only key shifts in attitudes toward life, death, and mourning, but also the evolving yet persistently material base of Protestant spirituality and practice. As such, Seeman's volume deserves the strong scholarly validation it has already received."—Church History and Religious Culture

"In Speaking with the Dead in Early America, Erik Seeman puts forward a convincing case that early American Protestants had established practices of communicating with the dead, long before the rise of Spiritualism in the mid-nineteenth century...Seeman’s comprehensive book should prod historians to take a closer look at how early Americans communicated with the dead. Rather than skip ahead to the middle of the nineteenth century and the rise of Spiritualism and séances as the starting point for studying American interest in the dead, Seeman demonstrates through extensive evidence and details that seventeenth- and eighteenth-century colonists (particularly in the North) spent considerable time and effort in making connections with those who had died."—Early American Literature

"Seeman has produced a profound work on the centrality of communing with the dead in Protestant America before the advent of séance Spiritualism. The emphasis on material culture for understanding religion is particularly important, and the text includes fascinating accounts of noisome ghosts and devoted mourners. Readers are given not only a book about communicating with the dead, but a window into the social and cultural changes that occurred over roughly three centuries of American life."—Cultural and Social History

"For more than two decades, Erik R. Seeman has been the leading authority on attitudes toward death in the early modern Atlantic world, and Speaking with the Dead in Early America is his most imaginative and compelling work to date. Seeman reconstructs the surprising history of Protestant communication with the dead during the two centuries prior to the advent of nineteenth-century Spiritualism, examining an impressive array of manuscript and published texts and material culture artifacts. The resulting book is deeply researched, compellingly written, and entirely persuasive."—Douglas L. Winiarski, University of Richmond

"Speaking with the Dead in Early America is a bold and provocative new reading of the Protestant relationship with the dead. Colonial and nineteenth-century Protestants spoke with and for the dead in a variety of cultural and material ways, and one of the signal achievements of this deeply researched and wide-ranging book is Seeman's creative use of unconventional sources: talking gravestones, mourning jewelry, women's needlework, spirit photographs, elegiac poetry, rural cemeteries, Shaker visions, Mormon baptisms for the dead-all are enlisted to convey the true depth of early Americans' love affair with the dead. Seeman is an expert storyteller, and in his hands (as in the minds and hearts of his subjects) the dead come to life again."—Susan Juster, author of Sacred Violence in Early America

"Erik Seeman's meticulously researched and highly readable book reveals how the human desire for contact with the dead survived both the Protestant Reformation and the Enlightenment to prosper in North America. By locating new religious developments of the nineteenth century in a prehistory of spirit communication, he sheds light on the distinctly American roots of modern spirituality, as well as a more complex religious history of early America."—Ann Braude, author of Radical Spirits: Spiritualism and Women's Rights in Nineteenth-Century America