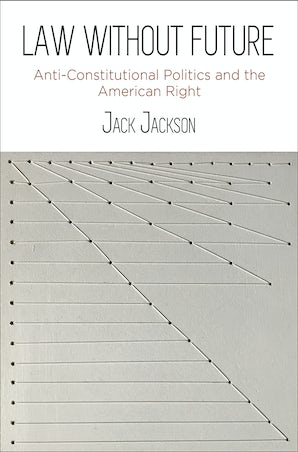 Anti-Constitutional Politics and the American Right

As the 2000 decision by the Supreme Court to effectively deliver the presidency to George W. Bush recedes in time, its real meaning comes into focus. If the initial critique of the Court was that it had altered the rules of democracy after the fact, the perspective of distance permits us to see that the rules were, in some sense, not altered at all. Here was a "landmark" decision that, according to its own logic, was applicable only once and that therefore neither relied on past precedent nor lay the foundation for future interpretations.

This logic, according to scholar Jack Jackson, not only marks a stark break from the traditional terrain of U.S. constitutional law but exemplifies an era of triumphant radicalism and illiberalism on the American Right. In Law Without Future, Jackson demonstrates how this philosophy has manifested itself across political life in the twenty-first century and locates its origins in overlooked currents of post-WWII political thought. These developments have undermined the very idea of constitutional government, and the resulting crisis, Jackson argues, has led to the decline of traditional conservatism on the Right and to the embrace on the Left of a studiously legal, apolitical understanding of constitutionalism (with ironically reactionary implications).

Preface. The Pardon of the Sheriff

Introduction. Politicization, Lawlessness, and Anti-Constitutional Times
Chapter 1. The Judicial Power: This Is Not a Decision
Chapter 2. The Executive Power: A Law That Is No Law
Chapter 3. The Legislative Power: This Death That Leads to Life
Chapter 4. Sovereign Power and Life Amid New Kings and Old Tutors
Coda. Constitutional Power Against Constitutional Government

"Jack Jackson has written a powerful and memorable book about the precursors to and implications of the anti-constitutionalism championed by the Right; he acutely identifies legal phenomena many of us have been thinking about but have not been able to put into words."—Theory & Event

"Law without Future eerily anticipated the 2020 election. Bookended by the 2000 decision in Bush v. Gore and the 2016 refusal of Republicans in the Senate, led by Senator McConnell, to hold hearings on President Obama’s nominee to the Supreme Court, Law without Future resonates with recent events, when a new confirmation immediately preceded efforts to undermine President Biden’s election."—Public Books

"An important [and] terrific book."—Alexander Heffner, host of "The Open Mind" on PBS

"[T]his book provides many productive insights into the conservative rejection of fundamental constitutional principles that currently tears at the fabric of political society."—National Lawyers Guild Review

"Law Without Future is a superb book making a brilliant and original argument: that American jurisprudence has entered a time when, increasingly, decisions are made without reference to past (that is, precedent) or future (that is, the application of the law). Jack Jackson is an excellent legal scholar, political theorist, and writer, and he proves himself a devastating critic of Bush v. Gore and other legal cases and laws."—James Martel, San Francisco State University