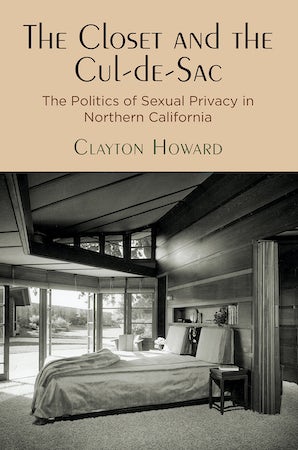 The Closet and the Cul-de-Sac

The right to privacy is a pivotal concept in the culture wars that have galvanized American politics for the past several decades. It has become a rallying point for political issues ranging from abortion to gay liberation to sex education. Yet this notion of privacy originated not only from legal arguments, nor solely from political movements on the left or the right, but instead from ambivalent moderates who valued both personal freedom and the preservation of social norms.

In The Closet and the Cul-de-Sac, Clayton Howard chronicles the rise of sexual privacy as a fulcrum of American cultural politics. Beginning in the 1940s, public officials pursued an agenda that both promoted heterosexuality and made sexual privacy one of the state's key promises to its citizens. The 1944 G.I. Bill, for example, excluded gay veterans and enfranchised married ones in its dispersal of housing benefits. At the same time, officials required secluded bedrooms in new suburban homes and created educational campaigns designed to teach children respect for parents' privacy. In the following decades, measures such as these helped to concentrate middle-class families in the suburbs and gay men and lesbians in cities.

In the 1960s and 1970s, the gay rights movement invoked privacy to attack repressive antigay laws, while social conservatives criticized tolerance for LGBTQ+ people as an assault on their own privacy. Many self-identified moderates, however, used identical rhetoric to distance themselves from both the discriminatory language of the religious right and the perceived excesses of the gay freedom struggle. Using the Bay Area as a case study, Howard places these moderates at the center of postwar American politics and shows how the region's burgeoning suburbs reacted to increasing gay activism in San Francisco. The Closet and the Cul-de-Sac offers specific examples of the ways in which government policies shaped many Americans' attitudes about sexuality and privacy and the ways in which citizens mobilized to reshape them.

Introduction. From the Straight State to the Culture Wars

PART I. THE FAMILY AND THE STATE
Chapter 1. Sex and the Crowded City
Chapter 2. Public Policy and the Right to Privacy

Clayton Howard is Associate Professor of History at the Ohio State University.

"[A]n original and ambitious study of postwar sexual politics in San Francisco and its suburbs..Bridging diverse subjects is Howard's attention to the question of sexual privacy, or, more specifically, the burgeoning assumption that nonnormative sexual practices and identities could be countenanced if they were relegated to the private sphere. . . . Howard's insights into the politics of sexual privacy and moderation are powerful and worthy of attention."—Journal of American History

"[A] wide-reaching, deeply researched work that is truly interdisciplinary in both its themes and archive...[I]t explores the interconnections among the history of sexuality, political history, urban history, the history of domesticity, architectural and design history, and legal history, putting all of these areas into productive conversation, not to mention into intellectual and social history writ large. It should serve as a model for other historians who wish to think about history outside of extreme, or at least firmly avowed ideological positions, and explore the analytical possibilities of ambivalence."—American Historical Review

"The Closet and the Cul-de-Sac is a fascinating book that brings together in revelatory ways the political economy of metropolitan development and the history of sexuality, offering new interpretations of postwar political culture. Through a rigorous investigation of housing and neighborhood development, it makes logical what first appears to be a paradox: the triumph of a 'tolerate but not endorse' politics around non-normative sexuality in the second half of the twentieth century. Clayton Howard makes a convincing case for a 'metropolitan' approach to political economy and social life and weighs the implications for sexual politics more thoroughly and creatively than I have seen anywhere else."—Sarah Igo, author of The Known Citizen: A History of Privacy in Modern America

"Clayton Howard has written an important, provocative, and path-breaking book centered on a wide-ranging, eye-opening, and nuanced discussion of the right to privacy and its role in conversations about public and domestic spaces, sexual rights and freedoms, and the proper place of queer and straight people in the body politic. No one has identified the varied threads of privacy embedded throughout the social fabrics of modern cities and suburbs like this before."—Bryant Simon, Temple University