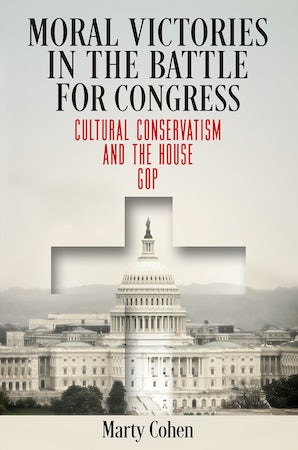 Moral Victories in the Battle for Congress

Cultural Conservatism and the House GOP

While Christian conservatives had been active in national politics for decades and had achieved a seat at the table by working with the Republican Party, the 1980s and 1990s saw them make significant strides by injecting issues of moral traditionalism into U.S. House races across the country. Christian conservative activists worked diligently to nominate friendly candidates and get them elected. These moral victories transformed the Republican House delegation into one that was much more culturally conservative and created a new Republican majority. In Moral Victories, Marty Cohen seeks to chronicle this significant political phenomenon and place it in both historical and theoretical contexts. This is a story not only of the growing importance of moral issues but also of the way party coalitions change, and how this particular change began with religiously motivated activists determined to ban abortion, thwart gay rights, and restore traditional morality to the country.

Beginning in the early 1980s, and steadily building from that point, religious activists backed like-minded candidates. Traditional Republican candidates, more concerned about taxes and small government, resisted the newcomers and were often defeated. As a result, increasing numbers of House Republican nominees were against abortion and gay rights. Voters responded by placing moral issues above their interests in economic policies, which led to the election of ever more socially conservative representatives. As a result, the House Republican caucus evolved from a body that advocated largely for low taxes and small government to one equally invested in moral and social issues, especially abortion and gay rights. The new moralistic Republican candidates were able to win in districts where traditional business Republicans could not, thereby creating the foundation for a durable Republican majority in the House and reshaping the American political landscape.

Chapter 1. The Lay of the Land
Chapter 2. A Voter's Right to Choose
Chapter 3. Party Coalition Change and U.S. House Elections
Chapter 4. From the Protests to the Precincts
Chapter 5. Religion and Republicanism
Chapter 6. Overcoming the Past
Chapter 7. Issue Polarization and Voting Behavior in U.S. House Elections
Chapter 8. The Importance of Being Moral
Chapter 9. Moral Victories and a New GOP Majority

"Few transformations in recent U.S. politics are as important as the rise of the Christian right within the GOP. Marty Cohen provides a real inside sense for how changes in recruitment have affected congressional politics."—Eric Schickler, University of California, Berkeley

"Combining statistical analysis with narrative case studies, Marty Cohen goes beyond the familiar story of Newt Gingrich and special interest groups to illuminate the conversion of the House of Representatives into a radically conservative body."—Clyde Wilcox, Georgetown University