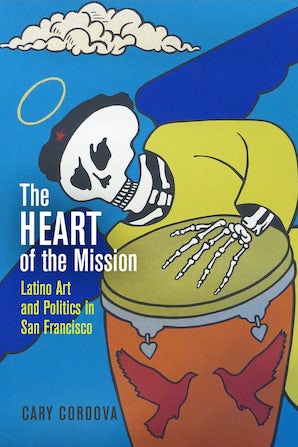 The Heart of the Mission

In The Heart of the Mission, Cary Cordova combines urban, political, and art history to examine how the Mission District, a longtime bohemian enclave in San Francisco, has served as an important place for an influential and largely ignored Latino arts movement from the 1960s to the present. Well before the anointment of the "Mission School" by art-world arbiters at the dawn of the twenty-first century, Latino artists, writers, poets, playwrights, performers, and filmmakers made the Mission their home and their muse.

The Mission, home to Chileans, Cubans, Guatemalans, Mexican Americans, Nicaraguans, Puerto Ricans, and Salvadorans never represented a single Latino identity. In tracing the experiences of a diverse group of Latino artists from the 1940s to the turn of the century, Cordova connects wide-ranging aesthetics to a variety of social movements and activist interventions. The book begins with the history of the Latin Quarter in the 1940s and the subsequent cultivation of the Beat counterculture in the 1950s, demonstrating how these decades laid the groundwork for the artistic and political renaissance that followed. Using oral histories, visual culture, and archival research, she analyzes the Latin jazz scene of the 1940s, Latino involvement in the avant-garde of the 1950s, the Chicano movement and Third World movements of the 1960s, the community mural movement of the 1970s, the transnational liberation movements in Nicaragua and El Salvador, and the AIDS activism of the 1980s. Through these different historical frames, Cordova links the creation of Latino art with a flowering of Latino politics.

"Cary Cordova's The Heart of the Mission is a complex, necessary book . . . Cordova's impressive research, which includes extensive archival excavation, artist interviews, and urban fieldwork, reveals an important and previously unexplored history of local activism practiced through Latino poster art, which spread word of the struggles of insurgent movements such as the Nicaraguan Sandinistas; Salvadoran diasporic art; the cultural politics of Día de los Muertos; and the founding of galleries and community art centers."—Journal of American History

"Cordova's excellent book stands as a significant contribution to many fields, and scholars across disciplines will find tremendous value in it."—Western Historical Quarterly

"Cordova tells a deeply compelling story about social and culturaltransformation in the Mission District in the twentieth century. Her book is worth reading for anumber of reasons, not the least of which is that The Heart of the Mission fills important gaps inpopular narratives about the history of California, San Francisco, sixties radicalism, the lineage ofLatino creative culture in America, and even postmodernism . . . [T]he book is a powerful testimony to the historical influence ofSan Francisco's Latino artists and activists on the culture of the city. And, crucially, it contextualizesthe dramatic changes currently sweeping through the heart of the Mission and the fights that arebeing waged to stop them."—H-California

"This is a wonderful book that is felicitously written, passionately argued, and full of information that is otherwise difficult to find. Cary Cordova's study fills a major gap in the current literature on Latino arts movements in the United States, as well as in the cultural history of San Francisco and California."—Richard Cándida Smith, University of California, Berkeley

"Cary Cordova has unearthed some truly fascinating archival material. Challenging the dominance of a certain type of Chicano art and identity politics, she expands the chronology and geography of Latino Art in the United States to include 1950s tango and jazz and contemporary AIDS activism."—A. Joan Saab, University of Rochester