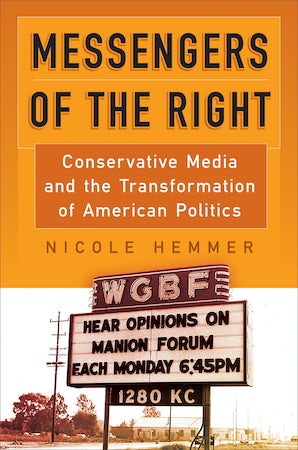 Messengers of the Right

Conservative Media and the Transformation of American Politics

From Rush Limbaugh and Sean Hannity to Glenn Beck and Matt Drudge, Americans are accustomed to thinking of right-wing media as integral to contemporary conservatism. But today's well-known personalities make up the second generation of broadcasting and publishing activists. Messengers of the Right tells the story of the little-known first generation.

Beginning in the late 1940s, activists working in media emerged as leaders of the American conservative movement. They not only started an array of enterprises—publishing houses, radio programs, magazines, book clubs, television shows—they also built the movement. They coordinated rallies, founded organizations, ran political campaigns, and mobilized voters. While these media activists disagreed profoundly on tactics and strategy, they shared a belief that political change stemmed not just from ideas but from spreading those ideas through openly ideological communications channels.

In Messengers of the Right, Nicole Hemmer explains how conservative media became the institutional and organizational nexus of the conservative movement, transforming audiences into activists and activists into a reliable voting base. Hemmer also explores how the idea of liberal media bias emerged, why conservatives have been more successful at media activism than liberals, and how the right remade both the Republican Party and American news media. Messengers of the Right follows broadcaster Clarence Manion, book publisher Henry Regnery, and magazine publisher William Rusher as they evolved from frustrated outsiders in search of a platform into leaders of one of the most significant and successful political movements of the twentieth century.

PART I. NETWORKS
Chapter 1. The Outsiders
Chapter 2. The Outlets
Chapter 3. The Obstacles

"Nicole Hemmer's well-researched and well-argued book Messengers of the Right . . . [emphasizes] the contributions of three 'media activists' who helped give coherence to the midcentury right: the radio host and political organizer Clarence Manion, the book publisher Henry Regnery, and the longtime National Review publisher William A. Rusher. Hemmer convincingly shows how all three helped pioneer the ideologically charged conservative media of our own time."—The New York Review of Books

"In recent decades, American politics has been transformed by the explosion of right-wing media outlets-from Rush Limbaugh and talk radio to Roger Ailes and Fox News to countless publishing imprints, websites, and little magazines. With Messengers of the Right, historian Nicole Hemmer has written the single best book to date about the roots and growth of the ideas and networks underneath it all. Deeply researched, subtly argued, and lucidly and often humorously written, this first-rate work of scholarship instantly joins the must-read list for any student of the history of conservatism, the history of modern media, or indeed the history of the polarized political culture in which we find ourselves today."—David Greenberg, author of Republic of Spin: An Inside History of the American Presidency