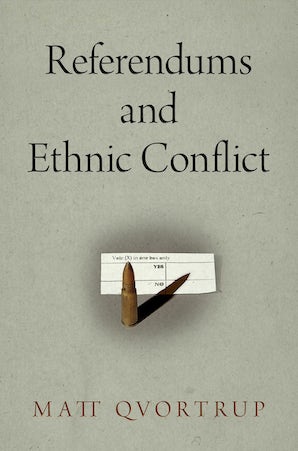 Although referendums have been used for centuries to settle ethnonational conflicts, there had yet been no systematic study or generalized theory concerning their effectiveness until Matt Qvortrup's Referendums and Ethnic Conflict. Qvortrup's study filled the gap with a comparative and empirical analysis of all the referendums held on ethnic and national issues from the French Revolution to the 2012 referendum on statehood for Puerto Rico. Drawing on political theory and descriptive case studies, the scholar created typologies of referendums that are held to endorse secession, redraw disputed borders, legitimize a policy of homogenization, or otherwise manage ethnic or national differences. He considered the circumstances that compel politicians to resort to direct democracy, such as regime change, and the conditions that might exacerbate a violent response. Qvortrup offers a clear-eyed assessment of the problems raised when conflict resolution is sought through referendum as well as the conditions that are likely to lead to peaceful outcomes.

This updated and revised edition includes a new introduction bringing the general field to the present, as well as new specific sections on Scotland (2014), Catalonia (2017), and the Brexit vote in the United Kingdom (2016). The original work's political framework now also covers the literature on identity politics, online campaigning, the regulation of social media, and how referendums are used increasingly as populist devices. This edition also updates referendum results through the end of 2020.