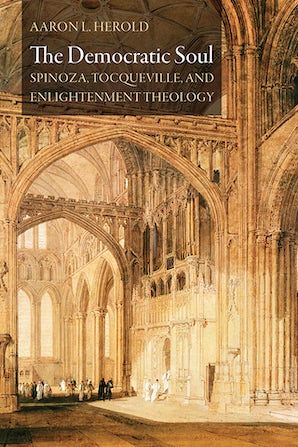 In The Democratic Soul, Aaron L. Herold argues that liberal democracy's current crisis—of extreme polarization, rising populism, and disillusionment with political institutions—must be understood as the culmination of a deeper dissatisfaction with the liberal Enlightenment. Major elements of both the Left and the Right now reject the Enlightenment's emphasis on rights as theoretically unfounded and morally undesirable and have sought to recover a contrasting politics of obligation. But this has re-opened questions about the relationship between politics and religion long thought settled.

To address our situation, Herold examines the political thought of Spinoza and Tocqueville, two authors united in support of liberal democracy but with differing assessments of the Enlightenment. Through an original reading of Spinoza's Theologico-Political Treatise, Herold uncovers the theological foundation of liberal democracy: a comprehensive moral teaching rehabilitating human self-interest, denigrating "devotion" as a relic of "superstition," and cultivating a pride in living, acting, and thinking for oneself. In his political vision, Spinoza articulates our highest hopes for liberalism, for he is confident such an outlook will produce both intellectual flourishing and a paradoxical recovery of community.

But Spinoza's project contains tensions which continue to trouble democracy today. As Herold shows via a new interpretation of Tocqueville's Democracy in America, the dissatisfactions now destabilizing democracy can be traced to the Enlightenment's failure to find a place for religious longings whose existence it largely denied. In particular, Tocqueville described a natural human desire for a kind of happiness found, at least partly, in self-sacrifice. Because modernity weakens religion precisely as it makes democracy stronger than liberalism, it permits this desire to find new and dangerous outlets. Tocqueville thus sought to design a "new political science" which could rectify this problem and which therefore remains indispensable today in recovering the moderation lacking in contemporary politics.

[A] probing analysis of the foundations of liberal democracy. Through a close textual analysis of Spinoza’s Theologico-Political Treatise and Tocqueville’s Democracy in America, Herold provides a compelling account of the origin and trajectory of liberalism...[A]n essential read for anyone concerned with the crisis of liberalism. A proper understanding of the origin and future of liberalism requires an apprenticeship with Spinoza and Tocqueville. Herold’s book induces us to revive these great thinkers of the past and to enter into dialogue with them concerning the new and enduring problems of human existence.
–

"—The Review of Politics