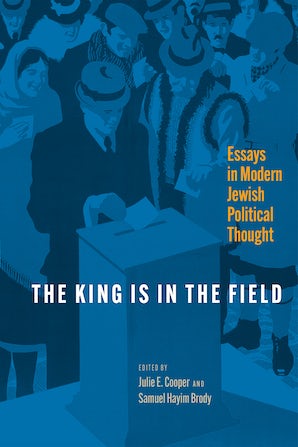 The King Is in the Field

If politics is about the state, can a stateless people be political? Until recently, scholars were fiercely divided regarding whether Jews engaged in politics, displayed political wisdom, or penned works of political thought over the two millennia when there was no Jewish state. But over the past few decades, the field of Jewish political thought has begun to examine the ways in which Jewish individuals and communal organizations behaved politically even in diaspora.

The King Is in the Field centers writing from leading scholars that serves as an introduction to this exciting field, providing critical resources for anyone interested in thinking about politics both within and beyond the state. From kabbalistic theology to economic philanthropy, from race and nationalism in the U.S. to Israeli legal discourse and feminist activism, this key study of Jewish political thought holds the promise to reorient the field of political thought as a whole by expanding conceptions of what counts as “political.”

In a world in which statelessness now applies to 100 million individuals, this volume illuminates ways to understand how diaspora Jewish political thought functioned in adopted homelands. This approach allows the book to offer questions and analysis that add depth and breadth to academic studies of Jewish politics while simultaneously offering a blueprint for future volumes interrogating political action through multiple diasporas.

"The essays in this important volume develop a broad and diverse array of Jewish political thinking in the Jewish past and present. Anyone interested in modern Jewish politics, and indeed in modern Judaism, will learn much from this book."—Leora F. Batnitzky, author of How Judaism Became a Religion: An Introduction to Modern Jewish Thought