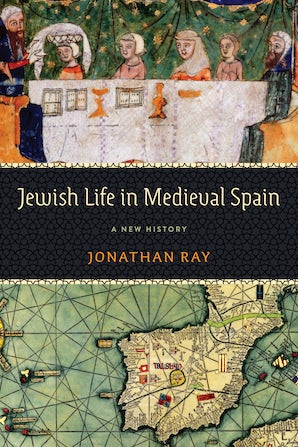 Jewish Life in Medieval Spain is a detailed exploration of the Jewish experience in medieval Spain from the dawn of Sephardic society in the ninth century to the expulsion of 1492. An important contribution of the book is the integration of the rise and fall of Jewish life in Muslim al-Andalus into the history of the Jews in medieval Christian Spain. It traces the collapse of Jewish life in Muslim Spain, the emigration of Andalusi Jewry to the lands of Christian Iberia, and the long and difficult confluence of these two distinct Jewish subcultures.

Focusing on internal developments of Jewish society, it offers a narrative of Jewish history from the inside out, bringing to light the various divisions and rivalries within the Jewish community. This approach, in turn, allows for a deeper understanding of the complex relations between Spanish Jews and their Muslim and Christian neighbors. Jonathan Ray’s original perspective on the Jewish experience is particularly instructive when considering the widescale anti-Jewish riots of 1391. The combination of violence and mass conversion of the Jews irrevocably shifted the dynamics of inter-religious relations as well as those within the Jewish community itself. Yet even in the wake of these tragic events, the Jews of Spain continued to flourish, fostering a culture that they would carry into exile and that would preserve the memory of Jewish Spain for centuries to come.