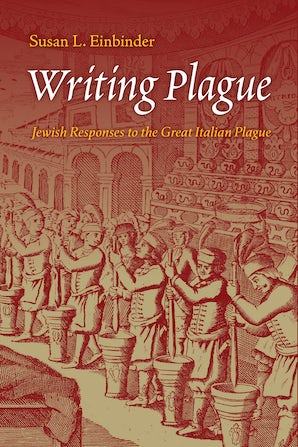 A wave of plague swept the cities of northern Italy in 1630–31, ravaging Christian and Jewish communities alike. In Writing Plague Susan L. Einbinder explores the Hebrew texts that lay witness to the event. These Jewish sources on the Great Italian Plague have never been treated together as a group, Einbinder observes, but they can contribute to a bigger picture of this major outbreak and how it affected people, institutions, and beliefs; how individuals and institutions responded; and how they did or did not try to remember and memorialize it. High self-consciousness characterizes many of the authorial voices, and the sophisticated and deliberate ways these authors represented themselves reveal a complex process of self-fashioning that equally contours the representation and meaning of plague. Conversely, it is under the strain of plague that conventions of self-fashioning come to the fore.

In the end, what proves most striking is how quickly these accounts retreated into obscurity. Why was this plague, which was among the most documented of all outbreaks since the Black Death of the fourteenth century, ultimately consigned to silence in Jewish memory? Did the memory take shape outside the written or material remains that we typically consult, in ephemeral forms that were lost over time? How much were the official genres of commemoration responsible for the erosion of historical particularity? How much did these conventionalized forms of mourning help individuals find language for private experience? And how, conversely, was private experience reconfigured to signify public grief?

Throughout Writing Plague, Einbinder unearths and analyzes a cluster of little-known texts, reading them as much for the things about which they remain silent as for the things they seem openly to express. It is a compelling hybrid work of literary criticism and historical reflection about premodern constructions of self and community.