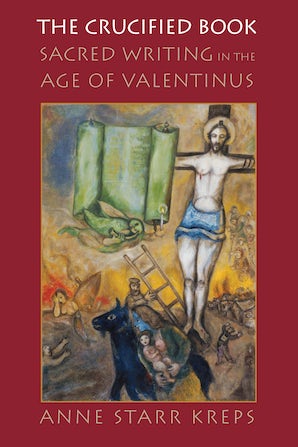 Sacred Writing in the Age of Valentinus

In the Gospel of Truth, a second-century text associated with the Christian Platonist Valentinus, a crucified Jesus is depicted as wrapped in a scroll and reading aloud the contents of his heart as he dies. This is just one of many strange appearances of the physical book in this text and in the surviving fragments of Valentinus. Through its representations of the written word, Anne Kreps argues, the Gospel of Truth promoted a living document perspective on the holy book, encouraging the generation of religious books as new sources of revelatory authority.

The Crucified Book locates the Gospel of Truth in a broader ancient debate about books and their attendant authority. Roman and Jewish texts exhibit similar efforts to equate holy persons with holy texts, while Christian heresiologists exhibit awareness of the phenomenon even as they condemn it. Although the Gospel of Truth is often set apart from mainstream Christianity in scholarship, its ideas about the nature of authoritative writing engaged with Greco-Roman culture and cohered with Jewish and Christian ideas about books in antiquity. Valentinus' views about the relationship between the oral and the written dovetailed with thinking on the nature of the sacred book that gradually became the trademark of Rabbinic Judaism, Kreps contends. Ultimately, because the Gospel of Truth reflects a mind that was at the center of the discursive debates that formed Judaism and Christianity, her book demonstrates the usefulness of so-called heretical texts for discussions on the parting of the ways between the two traditions.

"Anne Starr Kreps presents an important and novel thesis about a path not taken in the history of Christian scripture as a canon and as a concept. This is a captivating, bold, unusually readable, and highly significant work of scholarship."—Eva Mroczek, University of California, Davis