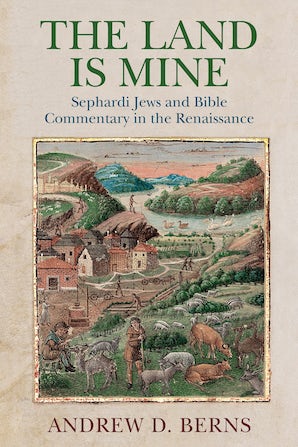 The Land Is Mine

Sephardi Jews and Bible Commentary in the Renaissance

After their expulsion from Spain in 1492, Sephardi Jews such as Isaac Abravanel, Abraham Saba, and Isaac Arama wrote biblical commentaries that stressed the significance of land. They interpreted Judaism as a tradition whose best expression and ultimate fulfillment took place away from cities and in rural settings. Iberian-Jewish authors rooted their moral teachings in an ethical treatment of the natural world, elucidating ancient agricultural laws and scrutinizing the physical context and built environments of Bible stories. The Land Is Mine asks what inspired this and suggests that the answer lies not in timeless exegetical or theological trends, but in the material realities of late medieval and early modern Iberia, during a period of drastic changes in land use.

The book uses a highly traditional source base in a decidedly untraditional way. In Jewish Studies, Andrew D. Berns observes, biblical commentary is typically studied as an intramural activity. Though scholars have conceded that Jewish scriptural exegesis welcomes material and ideas from other fields and traditions, little to no work treats premodern Hebrew Bible commentary as also drawing upon Classical and Christian sources as well as contemporary writings on land management and political economy. Abravanel, Saba, and Arama were engaged with questions that had broad resonance during their lives: the proper way to treat the land, the best occupations to pursue, and the ideal setting for human community. Scriptural commentary was the forum in which they addressed these problems and posed solutions to them.

A work of intellectual history,The Land Is Mine demonstrates that it is impossible to understand Jewish culture without considering the physical realities on which it depended.