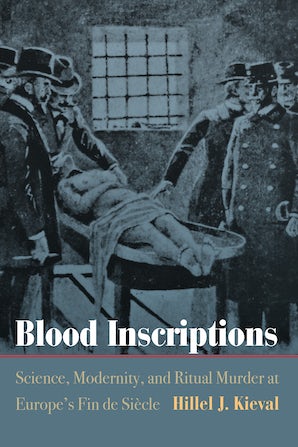 Although the Enlightenment had seemed to bring an end to the widely held belief that Jews murdered Christian children for ritual purposes, charges of the so-called blood libel were surprisingly widespread in central and eastern Europe on either side of the turn to the twentieth century. Well over one hundred accusations were made against Jews in this period, and prosecutors and government officials in Germany, Austria-Hungary, and Russia broke with long established precedent to bring six of these cases forward in sensational public trials. In Blood Inscriptions Hillel J. Kieval examines four cases—the prosecutions that took place at Tiszaeszlár in Hungary (1882-83), Xanten in Germany (1891-92), Polná in Austrian Bohemia (1899-1900), and Konitz, then Germany, now in Poland (1900-1902)—to consider the means by which discredited beliefs came to seem once again plausible.

Kieval explores how educated elites took up the accusations of Jewish ritual murder and considers the roles played by government bureaucracies, the journalistic establishment, forensic medicine, and advanced legal practices in structuring the investigations and trials. The prosecutors, judges, forensic scientists, criminologists, and academic scholars of Judaism and other expert witnesses all worked hard to establish their epistemological authority as rationalists, Kieval contends. Far from being a throwback to the Middle Ages, these ritual murder trials were in all respects a product of post-Enlightenment politics and culture. Harnessed to and disciplined by the rhetoric of modernity, they were able to proceed precisely because they were framed by the idioms of scientific discourse and rationality.

"Blood Inscriptions offers a nuanced and compelling assessment of how and why a medieval religious canard found a receptive home among rational, enlightened, and secular Europeans."—Robert Weinberg, Swarthmore College