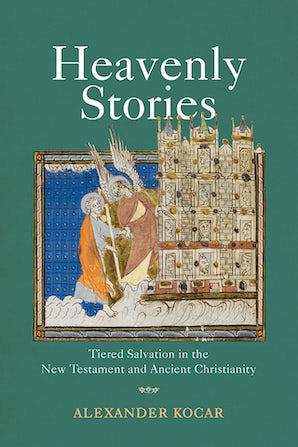 Tiered Salvation in the New Testament and Ancient Christianity

Salvation is often thought to be an all-or-nothing matter: you are either saved or damned. In the ancient world some figures, including Paul the Apostle, John of Patmos, Hermas, the Sethians, and the Valentinians, did not think this way, however. For them, there were multiple levels of salvation. Examining the reasons and implications for why these important thinkers believed that salvation comes in degrees, Heavenly Stories offers a fresh perspective on ancient thinking about responsibility, especially as it intersects with concerns such as genealogy and determinism. It shows why Jews and Christians of various kinds—some eventually declared orthodox, others heretical—correlated ethics and soteriology and argued over how this should be done.

By constructing a difference between a lower and higher level of salvation, ancient authors devised soteriological hierarchies that could account for ethical imperfections and social differentiation between their communities and outsiders, as well as reinforce idealized portrayals of conduct among members of their own groups. Alexander Kocar asks how these thinkers identified and described these ethical and social differences among people; what commitments motivated them to make such distinctions; what were the social effects of different salvific categories and ethical standards; and what impact did hierarchically structured soteriologies have on notions of ethical responsibility? His findings have repercussions for the study of ancient ethics (especially free will and responsibility), our understanding of orthodoxy and heresy, and scholarly debates surrounding the origins of Christianity as a movement that allegedly transcends ethnic boundaries.

Part I. The Salvation of Jews and Gentiles: Higher and Lower Levels of Salvation in the Letters of the Apostle Paul and John of Patmos's Revelation
Chapter 1. John's Heavenly City: The Book of Revelation and Jewish Narratives of Salvation
Chapter 2. Paul's Olive Tree: Saving Gentiles as Gentiles and Jews as Jews in Christ

Part III. The Threefold Division of Humanity: Identity, Soteriology, and Moral Responsibility in the Excerpts of Theodotus, the Tripartite Tractate, and Heracleon's Commentary on John
Chapter 5. Mapping the Heavens: The Missionizing Ethics and Soteriology of Valentinians
Chapter 6. The Threefold Division and Exegesis: Ethics in Heracleon's Commentary on John

"In this thoughtful and thought-provoking work, Alexander Kocar assembles an intriguing selection of Late- and post-Second Temple Jewish and early Christian texts around a premier question: How do their concepts of 'salvation' encode a vision of ethical behavior? What emerges is a picture of vigorous variety-in ideas about salvation and its dark obverse, sin; about what it is to be human; about the cosmos as alien exile and as home. How is one 'saved'? And saved from what, to what, for what? Heavenly Stories helps us to hear the ancient answers to these urgent questions."—Paula Fredriksen, author of Paul: The Pagans' Apostle