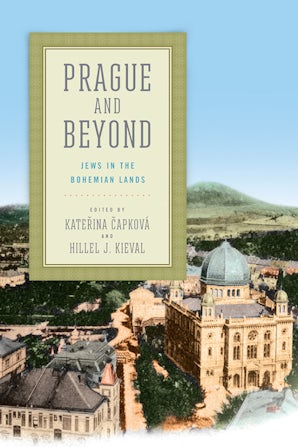 Jews in the Bohemian Lands

Prague's magnificent synagogues and Old Jewish Cemetery attract millions of visitors each year, and travelers who venture beyond the capital find physical evidence of once vibrant Jewish communities in towns and villages throughout today's Czech Republic. For those seeking to learn more about the people who once lived and died at those sites, however, there has until now been no comprehensive account in English of the region's Jews.

Prague and Beyond presents a new and accessible history of the Jews of the Bohemian Lands written by an international team of scholars. It offers a multifaceted account of the Jewish people in a region that has been, over the centuries, a part of the Holy Roman Empire and the Habsburg Monarchy, was constituted as the democratic Czechoslovakia in the years following the First World War, became the Nazi Protectorate of Bohemia and Moravia and later a postwar Communist state, and is today's Czech Republic. This ever-changing landscape provides the backdrop for a historical reinterpretation that emphasizes the rootedness of Jews in the Bohemian Lands, the intricate variety of their social, economic, and cultural relationships, their negotiations with state power, the connections that existed among Jewish communities, and the close, if often conflictual, ties between Jews and their non-Jewish neighbors.

Prague and Beyond is written in a narrative style with a focus on several unifying themes across the periods. These include migration and mobility; the shape of social networks; religious life and education; civic rights, citizenship, and Jewish autonomy; gender and the family; popular culture; and memory and commemorative practices. Collectively these perspectives work to revise conventional understandings of Central Europe's Jewish past and present, and more fully capture the diversity and multivalence of life in the Bohemian Lands.

"The history of Jewish communities in the Czech lands of Bohemia and Moravia have long been sidelined by scholars given the larger populations in Polish and Russian regions. The work under review corrects this...Čapková and Kieval have done a tremendous service in opening up the unique history and complexity of Jewish life in this neglected region."—Choice

"Prague and Beyond is an impressive work, offering a well-conceived and well-executed overview of the long history of Jews in the Czech lands. The book should be greeted with enthusiasm not only by Czech historians and historians of modern European Jewry, but by European historians more generally and by other readers with an interest in the lost world of pre-Holocaust Europe. All will find something to learn here."—David Rechter, University of Oxford

"There is simply no other integral narrative history of the Jews in the 'Bohemian lands.' Prague and Beyond will fill lacunae on reading lists in European and Jewish history, history of the Holocaust, and Central European political science."—Moshe Rosman, Bar-Ilan University