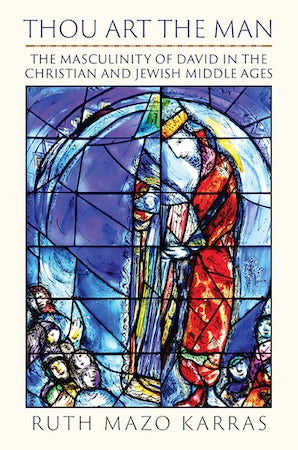 Thou Art the Man

The Masculinity of David in the Christian and Jewish Middle Ages

"How do we approach the study of masculinity in the past?" Ruth Mazo Karras asks. Medieval documents that have come down to us tell a great deal about the things that men did, but not enough about what they did specifically as men, or what these practices meant to them in terms of masculinity. Yet no less than in our own time, masculinity was a complicated construct in the Middle Ages.

In Thou Art the Man, Karras focuses on one figure, King David, who was important in both Christian and Jewish medieval cultures, to show how he epitomized many and sometimes contradictory aspects of masculine identity. For late medieval Christians, he was one of the Nine Worthies, held up as a model of valor and virtue; for medieval Jews, he was the paradigmatic king, not just a remnant of the past, but part of a living heritage. In both traditions he was warrior, lover, and friend, founder of a dynasty and a sacred poet. But how could an exemplar of virtue also be a murderer and adulterer? How could a physical weakling be a great warrior? How could someone whose claim to the throne was not dynastic be a key symbol of the importance of dynasty? And how could someone who dances with slaves be noble?

Exploring the different configurations of David in biblical and Talmudic commentaries, in Latin, Hebrew, and vernacular literatures across Europe, in liturgy, and in the visual arts, Thou Art the Man offers a rich case study of how ideas and ideals of masculinity could bend to support a variety of purposes within and across medieval cultures.

Introduction
Chapter 1. David His Tens of Thousands: Prowess and Piety
Chapter 2. Surpassing the Love of Women: Love, Friendship, Loyalty Between Men
Chapter 3. I Have Sinned Against the Lord: Sex and Penitence
Chapter 4. With Sacred Music upon the Harp: Creativity and Ecstasy
Chapter 5. O My Son Absalom: Establishing a Dynasty
Conclusion

"Thou Art The Man is an immensely readable book, both for the novice and expert alike, that leads us to reevaluate and deepen all our assumptions of David’s literary, theological, and artistic representation in the Middle Ages. This is a foundational book that will serve as the groundwork for not only further studies on David but also in that it urges us to think further about the masculinity of Jesus and the paradigms used to articulate a binary gender identity in the Middle Ages. Further research should work to shatter many of the cis-gender expectations of medieval gender studies and use this work to build new horizons for the complex dynamics of gender variance in the religious communities of the European Middle Ages."—Church History

"[F]ew historians have so immeasurably deepened our understanding of medieval gender and sexuality as has Ruth Mazo Karras...Whereas her other works offered breathtakingly sweeping accounts of vast subject matters--masculinity, prostitution, sexual unions--Thou Art the Man proves her equally adept in delivering erudite insights about the sole and singular figure of David...[W]ith relentless attention to detail and inspired, illuminating interpretations across a range of medieval Jewish and Christian artifacts...[t]his is a masterwork."—The Medieval Review