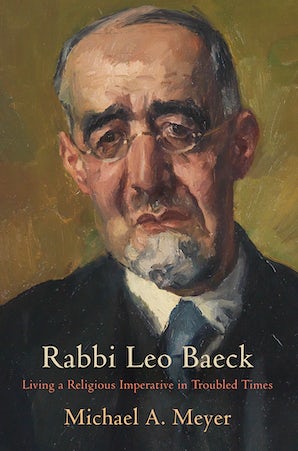 by Michael A. Meyer

Rabbi, educator, intellectual, and community leader, Leo Baeck (1873-1956) was one of the most important Jewish figures of prewar Germany. The publication of his 1905 Das Wesen des Judentums (The Essence of Judaism) established him as a major voice for liberal Judaism. He served as a chaplain to the German army during the First World War and in the years following, resisting the call of political Zionism, he expressed his commitment to the belief in a vibrant place for Jews in a new Germany. This hope was dashed with the rise of Nazism, and from 1933 on, and continuing even after his deportation to Theresienstadt, he worked tirelessly in his capacity as a leader of the German Jewish community to offer his coreligionists whatever practical, intellectual, and spiritual support remained possible. While others after the war worked to rebuild German Jewish life from the ashes, a disillusioned Baeck pronounced the effort misguided and spent the rest of his life in England. Yet his name is perhaps best-known today from the Leo Baeck Institutes in New York, London, Berlin, and Jerusalem dedicated to the preservation of the cultural heritage of German-speaking Jewry.

Michael A. Meyer has written a biography that gives equal consideration to Leo Baeck's place as a courageous community leader and as one of the most significant Jewish religious thinkers of the twentieth century, comparable to such better-known figures as Martin Buber, Franz Rosenzweig, and Abraham Joshua Heschel. According to Meyer, to understand Baeck fully, one must probe not only his thought and public activity but also his personality. Generally described as gentle and kind, he could also be combative when necessary, and a streak of puritanism and an outsized veneration for martyrdom ran through his psychological makeup. Drawing on a broad variety of sources, some coming to light only in recent years, but especially turning to Baeck's own writings, Meyer presents a complex and nuanced image of one of the most noteworthy personalities in the Jewish history of our age.

Epilogue. The Icon and the Person

"Michael A. Meyer’s important book is precisely the sort of biography Leo Baeck (1873–1956) would have wished for and a tribute to the German Jewish culture from which he emerged…Michael A. Meyer, who was born in Nazi Germany, is the preeminent historian of German Jewry. He has given us a biography of the kind of person we might all strive to emulate. The book is beautifully crafted, carefully weighing complex historic circumstances and shrewd biographical judgments, always remaining faithful to the very character of its subject."—Jewish Review of Books

"Baeck's quest to maintain the spiritual and ethical integrity of Judaism is presented by Meyer in his elegant and erudite biography as the emblematic embodiment of 'what was best in German Jewry'--an edifying legacy to which Berlin-bornMeyer hasdedicated his prodigiousscholarship to honor."—AJS Review

"Those wishing to learn more about what occurred within the German Jewish community during pre-WWII Germany, as well as an in-depth biography of arguably the most important pre-war Jewish leader, Rabbi Leo Baeck, as well as Baeck’s contribution to modern Jewish thought, the well-researched and compellingly written book just published by Dr. Michael A. Meyer called Rabbi Leo Baeck: Living a Religious Imperative in Troubled Times is well worth reading."—The Times of Israel-The Blogs

"[T]his wonderful biography, drawing on a broad variety of sources, reveals to us a great deal [about] the man and of the painful choices he had to make as leader of German Jewry during the Nazi period...This insight into the life and thought of this extraordinary man is a compelling read for historians and theologians alike."—The Jewish Chronicle

"Michael A. Meyer has written a superior biography, which in a short space masters a multitude of difficult problems."—The Yearbook of Research in Liberalism

"This biography comes closer to the fascinating figure of Leo Baeck in a dark time than anyone has hitherto been able to do."—Die Zeit

"A stirring biography written with equanimity and pathos. Michael A. Meyer is an authority on the history and theology of Reform Judaism in Germany and America, a master of the modern history of German Jewry, and a scholar fully conversant with the annihilation of that Jewry by the Nazis. That expertise has enabled him to construct a rich and elegant narrative."—Ismar Schorsch, Jewish Theological Seminary

"[An] elegantly and accessibly written biography…Written in an engaging tone for a broad audience, Meyer writes with great empathy for Baeck—as a scholar, a human being and above all as an individual who tried to live an exemplary moral life.. [A]n excellent work of scholarship [and] a powerful and important contribution not only to the historiography, but a ‘must-read’ for a much wider public."—German History