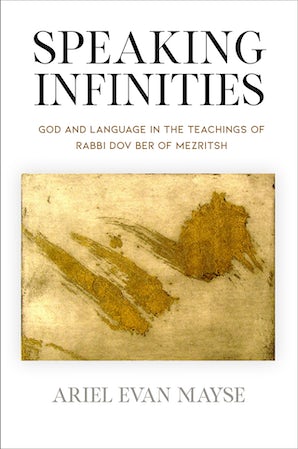 Enshrined in Jewish memory simply as "the Maggid" (preacher), Rabbi Dov Ber Friedman of Mezritsh (1704-1772) played a critical role in the formation of Hasidism, the movement of mystical renewal that became one of the most important and successful forces in modern Jewish life. In Speaking Infinities, Ariel Evan Mayse turns to the homilies of the Maggid to explore the place of words in mystical experience. He argues that the Maggid's theory of language is the key to unpacking his abstract mystical theology as well as his teachings on the devotional life and religious practice.

Mayse shows how Dov Ber's vision of language emerges from his encounters with Ba'al Shem Tov (the BeSHT), the founder of Hasidic Judaism, whose teaching put forward a vision of radical divine immanence. Taking the BeSHT's notion of God's immanence as a kind of linguistic vitality echoing in the cosmos, Dov Ber developed a theory of language in which all human tongues, even in their mundane forms, have the potential to become sacred when returned to their divine source.

Analyzing homilies and theological meditations on language, Mayse demonstrates that Dov Ber was an innovative thinker and contends that, in many respects, it was Dov Ber, rather than the BeSHT, who was the true founder of Hasidism as it took root, and the foremost shaper of its early theology. Speaking Infinities offers an exploration of this introspective mystic's life, gleaned from scattered anecdotes, legends, and historical sources, distinguishing the historical personage from the figure that emerges from the composite array of textual and oral traditions that have shaped the memory of the Maggid and his legacy.

Preface
A Note on Transliteration and Style
Introduction

Part I. Foundations
Chapter 1. The Life of the Maggid
Chapter 2. Sacred Words
Chapter 3. From Speech to Silence

Part II. The Divine Word
Chapter 4. Letters, Creation, and the Divine Mind
Chapter 5. The Nature of Torah and Revelation

Part III. The Devotional Life
Chapter 6. Study and the Sacred Text
Chapter 7. The Languages of Prayer

Penned by one of the most prominent writers in the field of Hasidic research, Ariel Evan Mayse’s newest book is a comprehensive work...In this important book, Mayse teaches us a fascinating lesson in perception of Jewish language, and undoubtedly in one of its most significant manifestations in the thought of R. Dov Ber of Mezritsh.

"[T]he first in-depth attempt to elucidate the linguistic theology of Rabbi Dov Ber...[Speaking Infinites] offers a new model that translates theological and metaphysical principles into the praxis of human speech, consequently rethinking classical typologies of devotional life...By elucidating the devotional and ethical implications of the Maggid’s theology, Speaking Infinities closes a gap between Hasidism and the broader intellectual and spiritual world to which Hasidism remains largely a mystery."—Journal of Religion

"Ariel Evan Mayse beautifully captures the complexity and subtlety of Rabbi Dov Ber's thought and illustrates its rich implications. For the first time, the eros and pathos of a seemingly dour and reserved writer are revealed in their compelling array."—Jonathan Garb, The Hebrew University