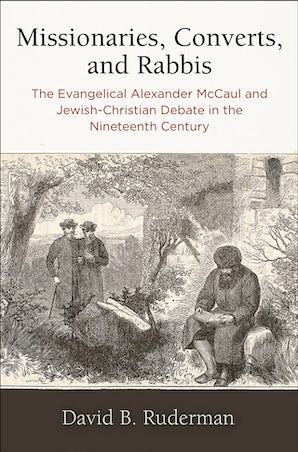 by David B. Ruderman

In Missionaries, Converts, and Rabbis, David B. Ruderman considers the life and works of prominent evangelical missionary Alexander McCaul (1799-1863), who was sent to Warsaw by the London Society for the Promotion of Christianity Amongst the Jews. He and his family resided there for nearly a decade, which afforded him the opportunity to become a scholar of Hebrew and rabbinic texts. Returning to England, he quickly rose up through the ranks of missionaries to become a leading figure and educator in the organization and eventually a professor of post-biblical studies at Kings College, London. In 1837, McCaul published The Old Paths, a powerful critique of rabbinic Judaism that, once translated into Hebrew and other languages, provoked controversy among Jews and Christians alike.

Ruderman first examines McCaul in his complexity as a Hebraist affectionately supportive of Jews while opposing the rabbis. He then focuses his attention on a larger network of his associates, both allies and foes, who interacted with him and his ideas: two converts who came under his influence but eventually broke from him; two evangelical colleagues who challenged his aggressive proselytizing among the Jews; and, lastly, three Jewish thinkers—two well-known scholars from Eastern Europe and a rabbi from Syria—who refuted his charges against the rabbis and constructed their own justifications for Judaism in the mid-nineteenth century.

Missionaries, Converts, and Rabbis reconstructs a broad transnational conversation between Christians, Jews, and those in between, opening a new vista for understanding Jewish and Christian thought and the entanglements between the two faith communities that persist in the modern era. Extending the geographical and chronological reach of his previous books, Ruderman continues his exploration of the impact of Jewish-Christian relations on Jewish self-reflection and the phenomenon of mingled identities in early modern and modern Europe.

"David Ruderman's Missionaries, Converts, and Rabbis is of great value in understanding an often glossed-over aspect of Jewish modernity. It is also indispensable for better understanding what is at stake as Jews and Christians continue to navigate what separates them and what unites them. Ruderman shows us the openness and seriousness of some of the missionaries and their Jewish detractors at a time when conversion was indeed very much on the table."—Tablet Magazine

"A fascinating, original, and pathbreaking book. With its comprehensive treatment of the contexts and meanings of the missionary Alexander McCaul's work and the rich gallery of figures who responded to it, Missionaries, Converts, and Rabbis will be indispensable to scholars, students, and readers interested in Jewish cultural and intellectual history of the nineteenth century."—Shmuel Feiner, author of The Jewish Enlightenment