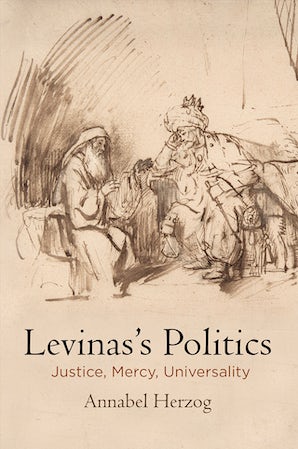 Emmanuel Levinas (1906-1995) was a French philosopher known for his radical ethics and for his contribution to Jewish thought in his commentaries on Talmudic sources. In Levinas's Politics, Annabel Herzog confronts a major difficulty in Levinas's philosophy: the relationship between ethics and politics. Levinas's ethics describes the encounter with the other, that is, with any other human being. For Levinas, the face-to-face encounter is a relationship in which the ego is commanded by a transcendent and unquestionable order to take responsibility for the other person. Politics, on the other hand, presupposes at least three people: the ego, the other, and any third party. Among three people, nothing can be transcendent; on the contrary, everything must be negotiated.

Against the conventional view of Levinas's conception of the political as the interruption and collapse of the ethical, Herzog argues that in the Talmudic readings, Levinas constructed politics positively. She shows that Levinas's Talmudic readings embody a pragmatism that complements, revises, and challenges the extreme ethical analyses he offers in his phenomenological works—Totality and Infinity, Otherwise than Being, and Of God Who Comes to Mind. Her analysis illuminates Levinas's explanations of the relationship between ethics and politics: ethics is the foundation of justice; justice contains a necessary violence that must be moderated by mercy; and justice, general laws, and national aspirations must be linked in an attempt to "improve universality itself."

"More than any other scholar to date, Herzog has succeeded in dispelling the false idea that Levinas’s thought has nothing to contribute to the field of political philosophy. Indeed, Herzog has not only clearly shown that Levinas’s Talmudic texts do present a coherent political philosophy, but even one that is potentially valuable in highlighting the many tensions and opportunities of contemporary, Western liberal democracies. For these reasons, but also for its clarity, depth, and scholarly richness, Levinas’s Politics deserves to find a wide and attentive readership among Levinas scholars and political philosophers alike."—Phenomenological Reviews

"Critics of Levinas's ethics as apolitical, anti-political, or even irrelevant for politics should be silenced once and for all by Annabel Herzog's fascinating, rich, and compelling account of politics and social philosophy in Levinas's Talmudic commentaries and other occasional writings. Herzog exhibits a consummate grasp of Levinas's thought and tells a subtle story about the way Levinas wrestles with the complexities of, and interactions between, ethics, politics, and social thought. The book is also a delight to read. Herzog has given us one of the most illuminating and important books on Levinas in many years."—Michael Morgan, Indiana University

"What do we make of Levinas's ethics if there is no politics in his thought? Annabel Herzog's beautifully written and cogently argued book addresses precisely this question and answers that his work does contain a politics, albeit one that's easy to miss. Turning to Levinas's Talmudic readings, Herzog shows that it is in these writings that Levinas explores the relationship between his 'ethics as first philosophy' and his commitment to the political. With her exhaustive scholarship and distinctive interpretation of Levinas's corpus, Herzog has given us a book that will be required reading for anyone working on Levinas, Continental philosophy, or postwar Jewish intellectual history."—Claire Katz, Texas A&M University

"Levinas's Politics is an original intervention in political philosophy as well as an excellent read. Annabel Herzog, in virtue of her talents as a leading political theorist, is well positioned to explicate the compelling principles at the heart of what seems to be Jewish religious discourse."—Samuel Moyn, Yale University