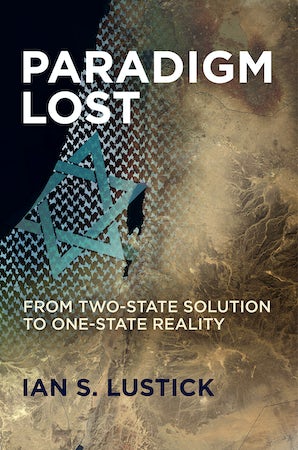 From Two-State Solution to One-State Reality

Why have Israelis and Palestinians failed to achieve a two-state solution to the conflict that has cost so much and lasted so long? In Paradigm Lost, Ian S. Lustick brings fifty years as an analyst of the Arab-Israeli dispute to bear on this question and offers a provocative explanation of why continued attempts to divide the land will have no more success than would negotiations to establish a one-state solution.

Basing his argument on the decisiveness of unanticipated consequences, Lustick shows how the combination of Zionism's partially successful Iron Wall strategy for dealing with Arabs, an Israeli political culture saturated with what the author calls "Holocaustia," and the Israel lobby's dominant influence on American policy toward the Arab-Israeli conflict scuttled efforts to establish a Palestinian state alongside Israel. Yet, he demonstrates, it has also unintentionally set the stage for new struggles and "better problems" for both Israel and the Palestinians. Drawing on the history of scientific ideas that once seemed certain but were ultimately discarded, Lustick encourages shifting attention from two-state blueprints that provide no map for realistic action to the democratizing competition that arises when different subgroups, forced to be part of the same polity, redefine their interests and form new alliances to pursue them.

Paradigm Lost argues that negotiations for a two-state solution between the Mediterranean Sea and the Jordan River are doomed and counterproductive. Israeli Jews and Palestinian Arabs can enjoy the democracy they deserve but only after decades of struggle amid the unintended but powerful consequences of today's one-state reality.

"This concise and powerfully argued volume by a leading scholar of the Israeli-Palestinian conflict is notable both as a diagnostic tool for understanding the contemporary political reality of Arab and Jewish inequality under Israeli sovereignty, and as a plea for thinking outside the reigning paradigm of partition that has governed assumptions of any joint political future."—Journal of Modern Jewish Studies

"Ian Lustick is arguably the foremost scholar of Israeli society and politics in the US . . . There is no question that Paradigm Lost is a path-breaking book."—Israel Studies Review

"Lustick's well-written and carefully researched new volume stands poised to become an important intervention in the literature on Israel/Palestine . . . Paradigm Lost covers a lot of ground in five punchy chapters and makes a powerful case for recognizing a one-state reality, as well as encouraging readers to begin to consider the value of equality and rights for all."—Journal of Palestine Studies

"Ian Lustick has written a richly informed and persuasive account of how the relationship between Israelis and Palestinians has become the seemingly dead-end tragedy it is today. This book provides an especially insightful analysis of why Israeli attitudes toward this issue evolved as they did. It is essential reading for anyone concerned about this conflict and hungry for new ways to think about it."—Paul R. Pillar, former National Intelligence Officer for the Near East and South Asia

"This important new book by one of the country's most thoughtful, insightful, and engaged students of Israel and its conflict with the Palestinians is at once both provocative and persuasive. The book makes a significant contribution to our understanding of the path that brought Israel to the situation it faces today-and of what is likely to come next. Meticulously researched and convincingly argued, Paradigm Lost is a must-read for all who are interested in, and care about, Israel and the Israeli-Palestinian conflict."—Mark Tessler, University of Michigan

"Paradigm Lost is an important addition to our understanding of the failure of the Two States Solution. It unpacks how the Iron Wall mentality came to dominate Israeli politics and hindered any serious attempt to reach peace with the Palestinians.mIt is a must read for every Israeli and American interested in going beyond the present impasse."—Leila Farsakh, University of Massachusetts