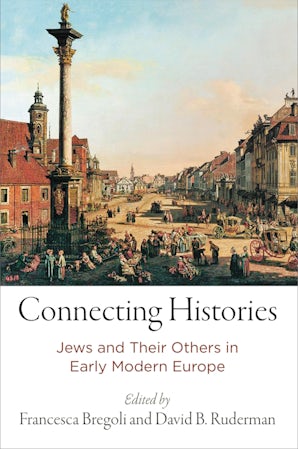 Jews and Their Others in Early Modern Europe

by Arnold Franklin, David B. Ruderman

Whether forced by governmental decree, driven by persecution and economic distress, or seeking financial opportunity, the Jews of early modern Europe were extraordinarily mobile, experiencing both displacement and integration into new cultural, legal, and political settings. This, in turn, led to unprecedented modes of social mixing for Jews, especially for those living in urban areas, who frequently encountered Jews from different ethnic backgrounds and cultural orientations. Additionally, Jews formed social, economic, and intellectual bonds with mixed populations of Christians. While not necessarily effacing Jewish loyalties to local places, authorities, and customs, these connections and exposures to novel cultural settings created new allegiances as well as new challenges, resulting in constructive relations in some cases and provoking strife and controversy in others.

The essays collected by Francesca Bregoli and David B. Ruderman in Connecting Histories show that while it is not possible to speak of a single, cohesive transregional Jewish culture in the early modern period, Jews experienced pockets of supra-local connections between West and East—for example, between Italy and Poland, Poland and the Holy Land, and western and eastern Ashkenaz—as well as increased exchanges between high and low culture. Special attention is devoted to the impact of the printing press and the strategies of representation and self-representation through which Jews forged connections in a world where their status as a tolerated minority was ambiguous and in constant need of renegotiation.

Exploring the ways in which early modern Jews related to Jews from different backgrounds and to the non-Jews around them, Connecting Histories emphasizes not only the challenging nature and impact of these encounters but also the ambivalence experienced by Jews as they met their others.

"Connecting Histories compels historians to think beyond the boundaries of their narrowly defined fields while also demonstrating the value of context that comes from the close study of lives, texts and rituals. Two leading historians of early modern Jewry, Francesca Bregoli and David Ruderman, have compiled an impressive collection of essays that force the reader to consider both the global and local aspects of Jewish history."—European History Quarterly

"Covering a wide range of experience in the Jewish world in terms of geography, economics, class, religious proclivities, languages, and genres, Connecting Histories should be required reading for scholars of early modern Jewish history."—Matt Goldish, The Ohio State University