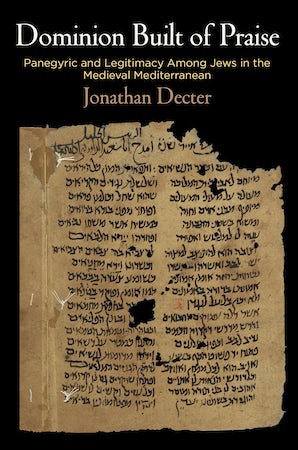 Panegyric and Legitimacy Among Jews in the Medieval Mediterranean

A constant feature of Jewish culture in the medieval Mediterranean was the dedication of panegyric texts in Hebrew, Judeo-Arabic, and other languages to men of several ranks: scholars, communal leaders, courtiers, merchants, patrons, and poets. Although the imagery of nature and eroticism in the preludes to these poems is often studied, the substance of what follows is generally neglected, as it is perceived to be repetitive, obsequious, and less aesthetically interesting than other types of poetry from the period. In Dominion Built of Praise, Jonathan Decter demurs. As is the case with visual portraits, panegyrics operate according to a code of cultural norms that tell us at least as much about the society that produced them as the individuals they portray. Looking at the phenomenon of panegyric in Mediterranean Jewish culture from several overlapping perspectives—social, historical, ethical, poetic, political, and theological—he finds that they offer representations of Jewish political leadership as it varied across geographic area and evolved over time.

Decter focuses his analysis primarily on Jewish centers in the Islamic Mediterranean between the tenth and thirteenth centuries and also includes a chapter on Jews in the Christian Mediterranean through the fifteenth century. He examines the hundreds of panegyrics that have survived: some copied repeatedly in luxurious anthologies, others discarded haphazardly in the Cairo Geniza. According to Decter, the poems extolled conventional character traits ascribed to leaders not only diachronically within the Jewish political tradition but also synchronically within Islamic and, to a lesser extent, Christian civilization and political culture. Dominion Built of Praise reveals more than a superficial and functional parallel between Muslim and Jewish forms of statecraft and demonstrates how ideas of Islamic political legitimacy profoundly shaped the ways in which Jews conceptualized and portrayed their own leadership.

Introduction
Chapter 1. Performance Matters: Between Public Acclamation and Epistolary Exchange
Chapter 2. Poetic Gifts: Maussian Exchange and the Working of Medieval Jewish Culture
Chapter 3. "Humble Like the Humble One": The Language of Jewish Political Legitimacy
Chapter 4. "Sefarad Boasts over Shinar": Mediterranean Regionalism in Jewish Panegyric
Chapter 5. "A Word Aptly Spoken": The Ethics of Praise
Chapter 6. "A Cedar Whose Stature in the Garden of Wisdom . . . ": Hyperbole, the Imaginary, and the Art of Magnification
Chapter 7. In Praise of God, in Praise of Man: Issues in Political Theology
Chapter 8. "May His Book Be Burnt Even Though It Contains Your Praise!": Jewish Panegyric in the Christian Mediterranean
Chapter 9. The Other "Great Eagle": Interreligious Panegyrics and the Limits of Interpretation
Afterword

"Dominion Built of Praise represents an original and comprehensive diachronic study of medieval Hebrew poetry of praise, how and why it was deployed, and what religious and literary intellectuals thought about it. Readers of medieval Hebrew literature and comparatists are indebted to Decter for inviting us to return to the panegyric as an artistically and conceptually complex cultural artifact and for opening important and fascinating new lines of inquiry into its discourse."—Speculum

"Dominion Built of Praise is clear and surefooted, its historical contextualization deft, and its revisionism refreshing and never heavy-handed. Jonathan Decter has a profound and intimate knowledge of medieval Hebrew poems and other texts, many of them unpublished and all of them in some ways overlooked. Medieval Hebrew praise poetry has never been taken so seriously, and Decter demonstrates why it should be."—Marina Rustow, Princeton University

"Panegyric is both central to the medieval Jewish literary tradition and aesthetically challenging. Jonathan Decter explores how it operated within a politically dominion-less Jewish community and how it was used to negotiate between the Jewish community or its members and the ruling Muslim or Christian power. Drawing on original textual research in Hebrew, Aramaic, Arabic, Judeo-Arabic, and Castilian, he has produced a study that contributes to all of those fields."—Suzanne Stetkevych, Georgetown University