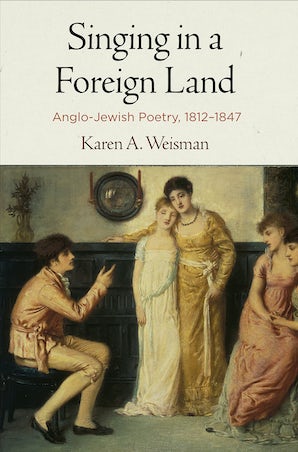 Singing in a Foreign Land

by Karen A. Weisman

In Singing in a Foreign Land, Karen A. Weisman examines the uneasy literary inheritance of British cultural and poetic norms by early nineteenth-century Anglo-Jewish authors. Focusing on a range of subgenres, from elegies to pastorals to psalm translations, Weisman shows how the writers she studies engaged with the symbolic resources of English poetry—such as the land of England itself—from which they had been historically alienated.

Weisman looks at the self-conscious explorations of lyric form by Emma Lyon; the elegies for members of the British royal family penned by Hyman Hurwitz; the ironic reflections on hybrid identities written by sisters Celia and Marion Moss; and the poems of Grace Aguilar that explicitly join lyric effusion to Jewish historical concerns. These poets were well-versed in both Jewish texts and mainstream literary history, and Weisman argues that they model an extreme example of Romantic self-reflexivity: they implicitly lament their own inability fully to appropriate inherited Romantic ideals about nature and transcendence even while acknowledging that those ideals are already deeply ironized by such figures as Coleridge, Shelley, and Wordsworth. And because they do not possess a secure history binding them to the landscape of British hearth and home, they recognize the need to create in their lyric poetry a stable narrative of identity within England and within the King's English even as they gesture toward the impossibility—and sometimes even the undesirability—of doing so.

Singing in a Foreign Land reveals how these Anglo-Jewish poets, caught between their desire to enter the English lyric tradition and their inability as Jews to share in the full religious and cultural Romantic heritage, asserted a subtle cultural authority in their poems that recognized an alienation from their own expressive resources.

"Singing in Foreign Land has many strengths and will appeal to many kinds of readers, including those with interests in Coleridge and other Romantic poets’ intertextual connections with Jewish writers; those seeking a more diverse view of British Romanticism; those seeking deep and intricate analyses of the major Anglo-Jewish writers of the period; and those with particular interests in Jewish-Christian literary relations...[An] intricate, complex, and wonderfully researched volume."—The Coleridge Bulletin

"Ground-breaking and beautifully written, Singing in a Foreign Land is an extraordinary contribution to our knowledge of religious diversity during the Romantic era. Karen A. Weisman is better equipped than any critic today to give us a fine-tuned picture of Romantic Jewish cultural production, one that refuses to see it as either merely oppositional or conformist."—Mark Canuel, University of Illinois at Chicago