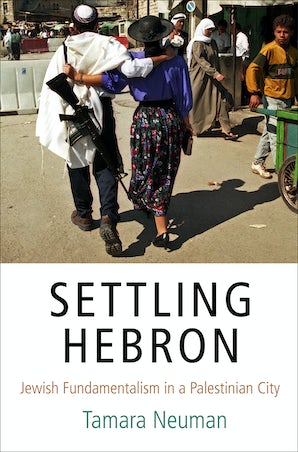 Jewish Fundamentalism in a Palestinian City

The city of Hebron is important to Jewish, Islamic, and Christian traditions as home to the Tomb of the Patriarchs, the burial site of three biblical couples: Abraham and Sarah, Isaac and Rebecca, and Jacob and Leah. Today, Hebron is one of the epicenters of the Israel-Palestine conflict, consisting of two unequal populations: a traditional Palestinian majority without citizenship, and a fundamentalist Jewish settler minority with full legal rights. Contemporary Jewish settler practices and sensibilities, legal gray zones, and ruling complicities have remade Hebron into a divided Palestinian city surrounded by a landscape of fragmented, militarized strongholds.

In Settling Hebron, Tamara Neuman examines how religion functions as ideology in Hebron, with a focus on Jewish settler expansion and its close but ambivalent relationship to the Israeli state. Neuman presents the first critical ethnography of the Jewish settler populations in Kiryat Arba and the adjacent Jewish Quarter in the Old City of Hebron,considered by many Israelis as the most "ideological" of settlements. Through extensive fieldwork, interviews with settlers, soldiers, displaced Palestinian urban residents and farmers as well as archival research, Neuman challenges dismissive portraits of settlers as rigid, fanatical adherents of an anachronistic worldview. At the same time, she reveals the extent of disconnection between these settler communities and mainstream Modern Orthodox Judaism, both of which interpret written sources on the sacredness of land—biblical texts, rabbinic commentary, and mystical traditions—in radically different ways. Neuman also traces the violent results of a settler formation, Palestinian responses to settler encroachment, and the connection between ideological settlement and economic processes. Settling Hebron explores the complexity of Hebron's Jewish settler community in its own right—through its routine practices and rituals, its most extreme instances of fundamentalist revision and violence, and its strategic relationships with successive Israeli governments.

"Through extensive fieldwork, interviews with settlers, soldiers, Palestinian residents as well as archival research, Neuman provides a fascinating and often disturbing account of a tense, abnormal co-existence between Palestinians and Jews in an occupied territory populated mostly by Palestinians yet administered by Israeli soldiers . . . This book is a must read for those who wish to understand the motives that drive the Jewish settlement movement. Anthropologists of the West Bank and the settlements, as well as political anthropologists will find this book most illuminating."—Journal of Modern Jewish Studies

"Tamara Neuman's book is essential for understanding the conflict over the holy city of Hebron as well as the question of land, settlement, and ideology in Israel and in the Palestinian territories. It demonstrates the de facto Israeli control and the blurring of the Green Line between Israel proper and the West Bank."—Reading Religion

"A stunning ethnographic account of the dynamic and intricate-and often intimate-entanglements of militarism, nationalism, gender, and Jewish fundamentalism in the West Bank."—Carol J. Greenhouse, Princeton University

"Settling Hebron is an impressive piece of research that greatly adds to our understanding of the politics of Jewish settlement in the West Bank."—Lihi Ben Shitrit, University of Georgia