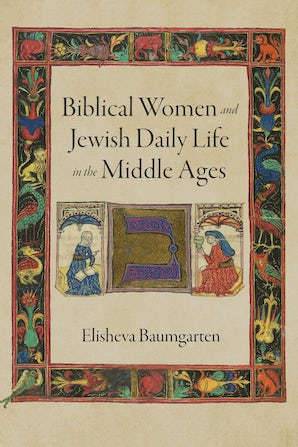 Biblical Women and Jewish Daily Life in the Middle Ages

In Biblical Women and Jewish Daily Life in the Middle Ages, Elisheva Baumgarten seeks a point of entry into the everyday existence of people who did not belong to the learned elite, and who therefore left no written records of their lives. She does so by turning to the Bible as it was read, reinterpreted, and seen by the Jews of medieval Ashkenaz. In the tellings, retellings, and illustrations of biblical stories, and especially of those centered around women, Baumgarten writes, we can find explanations and validations for the practices that structured birth, marriage, and death; women's inclusion in the liturgy and synagogue; and the roles of women as community leaders, givers of charity, and keepers of the household.

Each of the book's chapters concentrates on a single figure or a cluster of biblical women—Eve, the Matriarchs, Deborah, Yael, Abigail, and Jephthah's daughter—to explore aspects of the domestic and communal lives of Northern French and German Jews living among Christians in urban settings. Throughout the book more than forty vivid medieval illuminations, most reproduced in color, help convey to modern readers what medieval people could have known visually about these biblical stories. "I do not claim that the genres I analyze here—literature, art, exegesis—mirror social practice," Baumgarten writes. "Rather, my goal is to examine how medieval Jewish engagement with the Bible offers a window onto aspects of the daily lives and cultural mentalités of Ashkenazic Jews in the High Middle Ages."

In a final chapter, Baumgarten turns to the historical figure of Dulcia, a late twelfth-century woman, to ponder how our understanding of those people about whom we know relatively more can be enriched by considering the lives of those who have remained anonymous. The biblical stories through which Baumgarten reads contributed to shaping a world that is largely lost to us, and can help us, in turn, to gain access to lives of people of the past who left no written accounts of their beliefs and practices.

"Ingenious scholarship...Much of Biblical Women will likely resonate with modern readers, including for the ways it illuminates some of our own concerns...Baumgarten’s clear-eyed and painstaking attention to her subjects is an act of true kindness for these long-vanished people. Her book [helps readers] care about them, their lives, and their moral imaginations purely for their own sakes, as all good social history should."—Jewish Review of Books