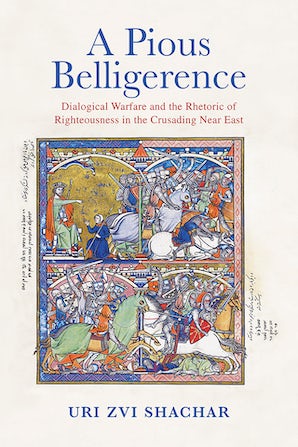 In A Pious Belligerence Uri Zvi Shachar examines one of the most contested and ideologically loaded issues in medieval history, the clash between Christians, Muslims, and Jews that we call the Crusades. He does so not to write about the ways these three groups waged war to hold onto their distinct identities, but rather to think about how these identities were framed in relation to one another. Notions of militant piety in particular provided Muslims, Christians, and Jews paths for thinking about both cultural boundaries and codependencies. Ideas about holy warfare, Shachar contends, were not shaped along sectarian lines, but were dynamically coproduced among the three religions.

The final decades of the twelfth century saw a rapid collapse of the Frankish and Ayyubid hegemonies in the Levant, followed by struggles for political dominion that lasted for most of the thirteenth century. The fragmented political landscape gave rise to the formation of multiple coalitions across political, religious, and linguistic divides. Alongside a growing anxiety about the instability of cultural boundaries, there emerged a discourse that sought to realign and reevaluate questions of similarity and difference. Where Christians and Muslims regularly joined forces against their own coreligionists, Shachar writes, warriors were no longer assumed to mark or protect lines of physical or political separation. Contemporary authors recounting these events describe a landscape of questionable loyalties, shifting identities, and unstable appearances.

Shachar demonstrates how in chronicles, apocalyptic treatises, and a variety of literary texts in Latin, French, Arabic, Hebrew, and Judeo-Arabic holy warriors are increasingly presented as having been rhetorically and anthropologically shaped through their contacts with their neighbors and adversaries. Writers articulated their thoughts about pious warfare through rhetorical devices that crossed confessional lines, and the meaning and force of these articulations lay in their invocation of tropes and registers that had purchase in the various literary communities of the Near East. By the late twelfth century, he argues, there had emerged a notion that threads through Christian, Muslim, and Jewish texts alike: that the Holy Land itself generates a particular breed of pious warriors by virtue of the hybridity that it encompasses.

"The sheer variety of the source base for crusade studies makes the comparative close reading of texts from the Latin, Old French, Arabic, Hebrew, and Judeo- Arabic traditions difficult. It takes a special kind of scholar with training and expertise in all the relevant languages to pull it off. Uri Zvi Shachar is just such a scholar and his first monograph is just such a project..Shachar succeeds in placing three literary traditions in conversation with one another, demonstrating how their shared visions of militant piety helped them to make sense of the increasingly entangled world of the thirteenth-century Near East."—Comitatus

"This fascinating study by Uri Zvi Shachar demonstrates the shortfalls of the general presentation of the crusader period and the interactions between Muslims, Christians, and Jews as dominated by warfare, religious animosity, and exclusion. He shows us that Muslims, Jews, and Christians not only shared the same geography, but they also spoke a similar 'language' saturated with common religious and cultural symbolisms, and that was only possible because of the avenues of interactions between them."—Suleiman A. Mourad, Smith College and IAS Nantes