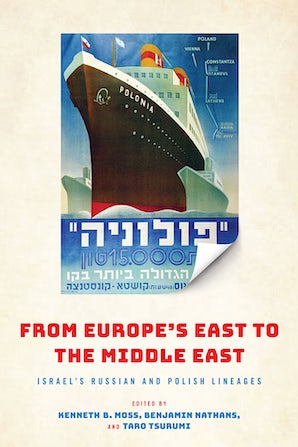 From Europe's East to the Middle East

The overwhelming majority of Jews who laid the foundations of the Israeli state during the first half of the twentieth century came from the Polish lands and the Russian Empire. This is a fact widely known, yet its implications for the history of Israel and the Middle East and, reciprocally, for the history of what was once the demographic heartland of the Jewish diaspora remain surprisingly ill-understood.

Through fine-grained analyses of people, texts, movements, and worldviews in motion, the scholars assembled in From Europe's East to the Middle East—hailing from Europe, Israel, Japan, and the United States—rediscover a single transnational Jewish history of surprising connections, ideological cacophony, and entangled fates. Against the view of Israel as an outpost of the West, whether as a beacon of democracy or a creation of colonialism, this volume reveals how profoundly Zionism and Israel were shaped by the assumptions of Polish nationalism, Russian radicalism, and Soviet Communism; the unique ethos of the East European intelligentsia; and the political legacies of civil and national strife in the East European "shatter-zone." Against the view that Zionism effected a complete break from the diaspora that had birthed it, the book sheds new light on the East European sources of phenomena as diverse as Zionist military culture, kibbutz socialism, and ultra-Orthodox education for girls. Finally, it reshapes our understanding of East European Jewish life, from the Tsarist Empire, to independent Poland, to the late Soviet Union. Looking past siloed histories of both Zionism and its opponents in Eastern Europe, the authors reconstruct Zionism's transnational character, charting unexpected continuities across East European and Israeli Jewish life, and revealing how Jews in Eastern Europe grew ever more entangled with the changing realities of Jewish society in Palestine.

Part I. Imperial and National Crucibles
Chapter 1. "Little Russia" in Palestine? Imperial Past, National Future (1860-1948)
Israel Bartal
Chapter 2. From Hyphenated Jews to Independent Jews: The Collapse of the Russian Empire and the Change in the Relationship Between Jews and Others
Taro Tsurumi
Chapter 3. Jewish Palestine and Eastern Europe: I Am in the East and My Heart Is in the West
Anita Shapira
Chapter 4. Stateless Nation: A Reciprocal Motif Between Polish Nationalism and Zionism
Marcos Silber

Part IV. Soviet Interludes
Chapter 13. American Jews and the Zionist Movements in the Soviet Union: The Joint and He-Haluts in Crimea in the 1920s
Chizuko Takao
Chapter 14. Refuseniks and Rights Defenders: Jews and the Soviet Dissident Movement
Benjamin Nathans

"This rich and dynamic collection makes an invaluable contribution to our understanding of the various connections between East European Jewish history and Jewish society, culture, and politics in Ottoman/British Palestine and, later, Israel. The volume provides a welcome overview of many of the central themes and key questions regarding the intersection between these two societies in essays by many of the most important scholars working on this fascinating chapter in modern Jewish history."—Scott Ury, Tel Aviv University